Shiplake is a two-centred village and rural parish on the left bank of the River Thames centred just over two miles south of Henley-on-Thames in Oxfordshire.

Shiplake railway station is the only through station on the Henley Branch Line. The railway crosses the Thames via the iron-girder Shiplake Railway Bridge which built in 1897. The line has train services connected to the national network requiring a change at Twyford to the south. Shiplake College is a large independent school which has many listed buildings.

The A4155 main road from Henley to Reading passes the western edge of the village, but does not go through the village itself.

The parish church dedicated to St Peter and St Paul dates from at least the 13th century and is the centre of the ecclesiastical parish of Shiplake in the diocese of Oxford. In 1869 the Gothic Revival architect G. E. Street rebuilt the chancel, north aisle, parts of the south aisle and replaced all its windows' traceries.[2] The church is a Grade-II* listed building

The church tower has a ring of eight bells,[3] all recast by the Whitechapel Bell Foundry in 2009.[4] Shiplake Church also has a Sanctus bell cast by Gillett & Johnston of Croydon in 1929.[4]

In 1773 the Thames Navigation Commission built Shiplake Lock on the River Thames about ½ mile downriver from the main village. In 1857 the Great Western Railway opened a branch line between Twyford and Henley-on-Thames, crossing the Thames on Shiplake Railway Bridge, about 300 yds downstream from Shiplake Lock. The GWR built the only through station on the branch at Lower Shiplake, a mile north-west of the historic village. Twyford provides access to the straight east-west part-stopping (semi-fast) services between hub city stations London Paddington and Reading. Lower Shiplake has since grown into the largest settlement within the parish.

In 1889 the author Jerome K. Jerome featured the village in his novel Three Men in a Boat.[5]

Shiplake Court is former a country house rebuilt in 1894 overlooking the Thames, which in 1959 became Shiplake College, an independent boarding school.[6] 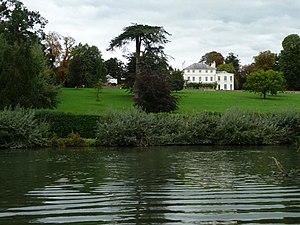 Most homes post-date the railway and the village has a small minority of industrial, storage, retail, distribution and office units.[1]

Outside of the college (including its listed water tower) and the church (excepting equally a stone cross in the churchyard) the only other conservation-listed structure is Shiplake House, in the starting category (Grade II). It is regency architecture with a white stucco façade "probably covering brick", a slate roof and stuccoed end stacks. It is a rectangular three-storey building with a five-window range. It has a central double door with flanking 8-pane sash windows, 12-pane sashes to ground and 1st floor and 6-pane sashes to the floor above. A flat (projecting) band course of stone is between the first two floors. A moulded cornice band is between its first and second floors. It has elegantly bracketed eaves. Part of the rear and side has a decorative wrought iron verandah.[12]

The Wargrave & Shiplake Regatta was founded in 1867 and is held over an August weekend for non-racing shells (also known as Olympic or fine boats).[13] It receives the most entries for skiffing and dongolas racing on the Thames. The regatta attracts a comparable number of entries to the largest shell-racing regattas on the Thames such as Kingston Regatta and Molesey Regatta.