Ware is a town of around 18,000 people in Hertfordshire, close to the county town, Hertford The Greenwich Meridian passes to the east of Ware.

The town lies on the course of the Great North Road, which here follows the Roman Ermine Street. The road has now largely become the A10, though its original course in the town, before the bypass was built, is now labelled the A1170. The large Kingsmead Viaduct stretches over the River Lea at Kings Meads. The town's £3.6 million two-mile bypass opened on 17 August 1976. At the north end of the bypass is the Wodson Park Sports Centre, with an athletics track, and Hanbury Manor, a hotel and country club.

Ware railway station is on the Hertford East Branch Line and is only single track but still permits Ware to serve as a commuter town. 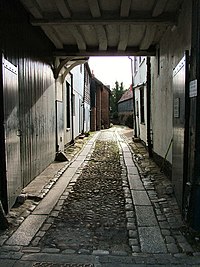 Archaeology has shown that Ware has been occupied since at least the Mesolithic period, which ended about 4000 BC)[1] The Romans had a sizable settlement here and foundations of several buildings, including a temple, and two cemeteries have been found.[2] A well-preserved Roman skeleton of a teenage girl has also been found.[3] Ware was on Ermine Street, the Roman road from London to Lincoln. It has been said that Ware is one of the oldest continuously occupied sites in Britain or Europe.[4]

The modern name of the town dates from the Anglo-Saxon period]][5] when weirs were built to impede the river boats of the invading Vikings. Alfred the Great defeated the Danes in a battle near Ware.

In the modern period, Ware became a great coaching town of the Old North Road, less than a day's journey from London. The town was once a centre of malting too.

The Ware Mutiny occurred on 15 November 1647, during the early stages the Second English Civil War at Corkbush Field, when soldiers were ordered to sign a declaration of loyalty to Thomas Fairfax, the commander-in-chief of the New Model Army, and the Army Council. When some with Leveller sympathies refused to do this they were arrested, and one of the ringleaders, Private Richard Arnold, was court-martialled and shot.[6]

When Ware Town Council's arms were granted in 1956 (to its predecessor), the shield celebrated the town's history; barge rudders refer to the bargemen of Ware, with the red and white striping on the rudders as the livery colours of the City of London, associating the Ware bargemen's free entry rights to that City; crossed coach horns refer to the town's long history as a coaching town; and sheaves of barley refer to the maltings. The motto of the town cave is Latin for "beware"; a pun on the town's name.[7] 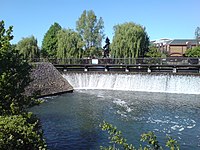 The River Lea flows through the centre of Ware and for centuries bore trade to the town. As an old brewing town (and some of the old maltings still stand, although none is functional), barley was transported in, and beer out by way of the river. Bargemen born in Ware were given the "freedom of the River Thames", avoiding the requirement of paying lock dues, as a result of their transport of fresh water and food in during the great plague of 1665–66. A local legend says that dead bodies were brought out of London and buried in Buryfield, but there is no evidence for this and the name of Buryfield apparently originates before the days of the Great Plague of London.

The Great Bed of Ware 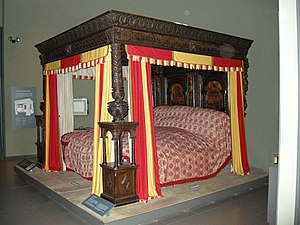 The Great Bed of Ware

The Great Bed of Ware]] was mentioned by Shakespeare and is now in the Victoria and Albert Museum in London.

The bed is 10’9” wide, 10’9” long by 7’6” high. It is not known when it was built but may have been of the 16th century; and it was certainly well known by Shakespeare's time. It is thought to have been made as an advertising gimmick for one of the local Inns and is known to have been in The White Hart, The George, The Crown and The Saracens Head. In the early 1930s the bed left Hertfordshire for the Victoria and Albert Museum.

There are many local stories told of the Great Bed of Ware and many visitors used to come to see it. According to records, twelve visitors at a time would hire the bed for the night to test the truth of its ability to rest so many.

Chaucer refers to Ware in the Canterbury Tales.

Shakespeare's Twelfth Night mentions the Great Bed of Ware ("as many lies as will lie in thy sheet of paper although the sheet were big enough for the bed of Ware in England, set ‘em down ")

Most famously, in The Diverting History of John Gilpin, a comic poem by William Cowper, Gilpin is unwillingly taken off at a gallop by his horse from London to Ware and back again. The horse set off at a mad gallop on its accustomed route on the Great North Road between London and Ware.[8] 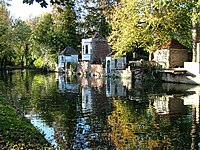 Ware has the remains of a fourteenth-century priory, now the local council offices and a conference centre. Recent restoration work has shown that the priory dates from the thirteenth century. Opposite the priory is the large fourteenth-century parish church of St Mary. It is known for its elaborate font with large carved stone figures.

The town is also famous for its many 18th-century riverside gazebos, several of which have been restored recently.

Scott's Grotto was built for John Scott of Amwell, an 18th-century poet who owned Amwell House from 1768. The grotto, the largest in the United Kingdom, is a series of chambers extending over 65 ft into the chalk hillside. The chambers are decorated with shells, stones such as flint and coloured glass. The grotto is owned by the local council and was restored in 1990 by the Ware Society.

During two weeks of the summer, Ware Council holds the 'Ware Festival' culminating in the 'Rock in the Priory' a one-day open-air Music Festival that grows each year in popularity.