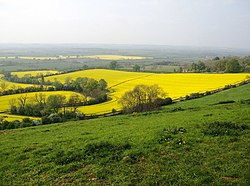 View over the Vale of Red Horse, from Spring Hill near Edgehill village.
The Vale of Red Horse, also called the Vale of the Red Horse or Red Horse Vale, is a rural district in southern Warwickshire, lying between the escarpment of Edgehill and the northern Cotswolds around the valley of the Stour.[1][2] The Vale's main settlements are Kineton and Shipston-on-Stour;[3] early gazetteers noted it as a rich corn-growing area, and it is still sparsely populated. The Fosse Way runs through the area and the Battle of Edgehill was fought on its fringes in October 1642.

The 17th century Warwickshire poet Michael Drayton devoted a long section of his topographical poem Poly-Olbion to what he called the "Vale of Red-horse", noting it was in length "near thirty miles" and deploring its obscurity compared to the better-known Vales of White Horse and Aylesbury. [4]

The Vale takes its name from the hill figure of a horse once cut into the red clay near the village of Tysoe. The figure, sometimes referred to as the Red Horse of Tysoe, was first recorded in 1607, and in its earliest form was nearly 100 yards long.[5] Various dates have been suggested for the figure's creation, ranging from the Anglo-Saxon period to the 15th century.