Uphill is a village near Weston-super-Mare in Somerset, at the southern edge of the town, on the Bristol Channel coast. It is part of the Winterstoke Hundred, in the north of the county.

The village is recorded in the Domesday Book as Opopille, from the Old English uppan pylle, meaning "above the creek", referring to the mouth of the Axe.[1]

There is evidence of a port at Uphill since Roman times, probably for the export of lead from the Mendip Hills.[2] The mouth of the River Axe is sheltered by Brean Down. The small quay at Uphill fell under the limited jurisdiction of the Port of Bristol, however it was a free port as it did not have the customs officers to collect revenues which were present at larger ports. In 1591 the captured French ship the Gray Honde from Bayonne was brought into Uphill, however; the normal trade from the 16th century was in livestock, brought from Monmouthshire to be fattened on the local rich grassland.[3]

During the Civil War the port was used to bring two regiments, about 1,500 men, of the Royalist Army from South Wales before the Battle of Langport.[4] It continued as a small landing stage for many centuries including the import of coal and iron and the export of local produce.[5] After the Enclosure Act of 1813 a public wharf was constructed for trade and was also used occasionally by passenger excursion ships.[3]

The Bristol to Exeter railway line runs through a steep cutting between Uphill and nearby Bleadon. This cutting is spanned by a high brick bridge known as "Devil's Bridge" and designed by Isambard Kingdom Brunel. The former Bleadon and Uphill railway station served the village from 1871 until 1964.

Uphill is situated at the south end of Weston Bay, where the River Axe flows into the Bristol Channel, and was once a busy port. The Mendip Way long-distance footpath has its western trailhead at Uphill near the wharf.

The village is dominated on its southern side by a large hill, the southern slope of which and the quarry at its western end form the Uphill Cliff 'Site of Special Scientific Interest', notable for its species-rich calcareous grassland. It consists of species-rich calcareous grassland and rock-face situated on Carboniferous Limestone. Steeper banks and knolls in the grassland have a flora which includes orchids Somerset Hair Grass Koeleria vallesiana, and Honewort Trinia glauca and the Goldilocks Aster linosyris along with several species of butterfly and Weevil (Curculionoidea).[6]

A tower on the hill is the remains of a 14th-century windmill. 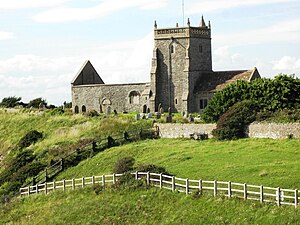 The Old Church of St Nicholas

On top of the hill stands an unroofed Norman church, now known as the Old Church of St Nicholas. It is now in the care of the Churches Conservation Trust.[7]

The present day Church of St Nicholas is situated on lower ground towards the north end of the village.[8]