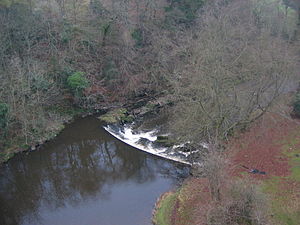 Aqueduct over the Avon, Falkirk

The source of the river is found a few miles southeast of Cumbernauld. Thence it runs eastwards through Avonbridge, then through the "Avon Gorge", through Muiravonside Country Park, and to the west of Linlithgow. From outside Linlithgow the Avon forms the county boundary, turning to flow north-east and then northwest finally northeast again in its last few miles on the broad plain of the Forth between Grangemouth and Bo'ness to enters the Firth of Forth.

The Avon Aqueduct, Scotland's longest aqueduct, carries the Union Canal above the river.

The name "Avon" belongs to several rivers in the British Isles. The name "Avon" is from Old Welsh, and simply means "River"; the modern Welsh for river is afon.

The Avon is mentioned in the Anglo-Saxon Chronicle for 710, by the name of Hæf or Hæfe[1], referring to a battle between the Northumbrians and the Picts.