The name of the mountain is from the Irish Gaelic language, in which it is called Binn Bhán, which means "White Peak"; it has thus been called "the Mont Blanc of Connemara". The name is given because there is a great deal of white rock on the mountain, mainly quartz, though this is more a feature of nearby Benbrack. 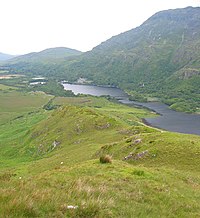