Tweedmouth is a town of Northumberland which has been merged effectively into Berwick-upon-Tweed. It stands on the south side of the River Tweed, across the bridges from the old town of Berwick.

Much of the working townscape is found in Tweedmouth, and the docks are here.

While Berwick was a town long disputed between the mediæval kingdoms, and was not considered part of Northumberland at all until the beginning of the seventeenth century, Tweedmouth was always English. It is Northumberland, but within Islandshire, one of the liberties of the Bishop of Durham locally situate in Northumberland and known as North Durham.

Notwithstanding its separateness from Berwick, the Corporation of Berwick-upon-Tweed governed Tweedmouth for centuries as Lord of the Manor of Tweedmouth.[1]

TWEEDMOUTH, a village, a township, and a parish, in Berwick district, Northumberland. The village stands on the Northeastern railway, at the junction of the branch to Kelso, 1 mile S of Berwick; had a castle, founded by King John, and destroyed by William of Scotland; is a seat of petty-sessions; carries on industry in iron foundries, a brewery, saw-mills, a paper mill, and engine works; and has a great r. station with telegraph, a church, two Presbyterian chapels, an ultra-mural cemetery, and a national school.
—John Marius Wilson: Imperial Gazetteer of England and Wales 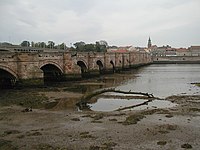 The bridges crossing the Tweed from Tweedmouth to Berwick, going upstream, are: