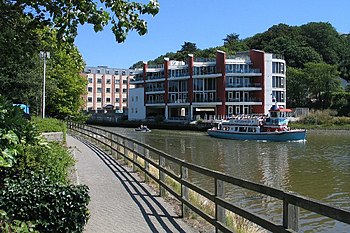 The Truro River in Truro 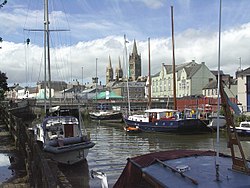 River Kenwyn converging with the Allen

The Truro River is a navigatble river in the city of Truro in Cornwall, which opens into a broad tidal creek emptying into the Carrick Roads on the county's southern coast. The river is formed by the union of the River Kenwyn and the River Allen and it is tidal and navigable for its whole length.

The Truro forms from the convergence of the two rivers in Truro itself, under the shadow of the Cathedral. It takes its name from the city. Below Truro, the river flows into the Carrick Roads, a joint estuary with the River Fal, and which opens into the English Channel

The river valleys form a bowl surrounding the city on the north, east and west and open to the Truro River in the south. The fairly steep-sided bowl in which Truro is located, along with high rainfall swelling the rivers and a spring tide in the River Fal, were major causes of flooding in 1988 which caused large amounts of damage to the city centre.[1] Since then, flood defences have been constructed around the city,[1] including an emergency dam at New Mill on the River Kenwyn and a tidal barrier on the Truro River, to prevent future problems.

The river from the city to the village of Malpas, including Lambe Creek and Calenick Creek, form 'Malpas Estuary Site of Special Scientific Interest'. It is an important habitat of tidal mudflats, which are feeding grounds for wildfowl and wading birds. The banks of the estuary are also noted for its flora.[2]