From Wikishire
Jump to: navigation, search
For the village in Monmouthshire, see Trellech.

Trelech is a village and parish in Carmarthenshire lying some 10 miles north-west of Carmarthen and 6½ miles south of Newcastle Emlyn. 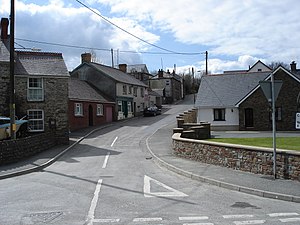 The village is home to the Hafodwenog Community Primary School, which has around 60 pupils aged 4 to 11, and was opened in 1972 to serve the children of the surrounding settlements of Alma, Bryn Iwan, Cilrhedyn, Dinas, Gelliwen, Pandy, Penybont, and Talog, as well as those of Trelech itself.

Trelech has a community centre (in the building, across the road, which housed the modern school's predecessor) and a pub, the Tafarn Beca. However, given the area's very rural and lightly populated nature, the village no longer has a shop or post office. There is a children's play area, and the school also has a small soccer field.

Trelech was the birthplace on 14 November 1801 of David Rees, the reforming Welsh Congregationalist minister, and on 3 November 1879 of the reporter, poet, and short-story writer Perceval Gibbon, who travelled extensively in Europe, Africa, and the Americas and died in Guernsey on 30 May 1926.