Newcastle Emlyn is a little town with a ruined castle in Carmarthenshire, tucked into a pair of meanders in the River Teifi, which here forms the boundary with neighbouring Cardiganshire.

The town takes its name from the cantref of Emlyn, a district in Mediæval Dyfed. The cantref was made part of the Norman March in the 12th century.

Across the bridges on the river in Cardiganshire is the village Adpar, formerly called Trefhedyn and which was an ancient borough in its own right.

Notable buildings in the town include a ruined 13th-century castle, first mentioned in Brut y Tywysogion in 1215, when it was seized by Llewelyn the Great. [1] The castle was captured by the Welsh during the revolt of 1287-8 and also by Owain Glyndŵr in 1403.

Newcastle Emlyn has a town hall and secondary school, Ysgol Gyfun Emlyn. Attractions around the area include an art gallery, the Attic Theatre company, the National Woollen Museum. The Teifi Valley Railway is also nearby, although the town has not had a passenger train service since 1952.

Across the Teifi towards Newcastle Emlyn

Newcastle Emlyn has managed to maintain a wide range of local services, based mainly on small family businesses.

In 1932, the former Co-operative Group creamery was reopened by Dried Milk Products to make cheese. After new parent Unigate decided to sell-off its non-milk related dairies, it was then bought by the Milk Marketing Board in 1979, and closed again in 1983.[2] Reopened by Saputo, it today manufactures mozzarella cheese using locally sourced dairy produce, and is the town's largest employer.

In 1895, the Teifi Valley Railway of the Great Western Railway reached Newcastle Emlyn railway station.[3] Originally conceived as a 7ft 0.25in broad-gauge line between Carmarthen and Cardigan by the Carmarthen and Cardigan Railway, it was absorbed into the GWR who developed the line into Newcastle Emlyn, the company saw no point in developing the line beyond this point, and so it became a terminus.

Passenger services ceased in 1952, but goods services due in part to milk train services to the Co-op later Dried Milk Products creamery co-located at the station, which produced cheese, continued until 1973.[4] After the cessation of freight services, the lines were removed and the station demolished.[5]

The legend of Emlyn Wyvern 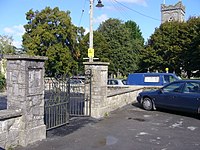 The entrance to King George's Field in Church Lane

The story of Gwiber Castell Newydd Emlyn (the Wyvern of Newcastle Emlyn) is a local tradition. It tells how, on one of the fair days when the town was full of people, a fierce winged viper called a wyvern breathing fire and smoke, alighted on the castle walls and, having cast threatening glances around, settled down to sleep. Its appearance on the castle at first brought terror to all but, after the fear had died down, a few brave townsfolk sought to destroy the fearsome monster.

A soldier devised the plan of wading the river Teifi to a point of vantage on the castle side and letting a red cloak float in the river and shooting the gwiber in a vulnerable under-part of the body. The creature, so violently startled from its slumber, caught sight of the cloak and fell upon it with horrible shrieks and tore it to shreds. The assailant meanwhile, escaped to a place of safety.

The wyvern, in its death throes, turned onto its back and floated down the river. From its wound gushed forth a most loathsome venom which polluted the water and killed all the fish. The legend tells of the great joy of the townsfolk when they saw the monster dead.[6]

There is a King George V Playing Field in the town