Treforest is a village in the south-east of Pontypridd in Glamorgan. It runs along the west bank of the River Taff while Glyntaff runs along its east bank. Treforest extends from immediately south east of Ynysangharad Park where the A4058 link from the A470 joins the A473 Broadway all the way to Tonteg in the south.

The village is historically connected with the Crawshay family who established a major tinplate works in 1835. Treforest is now known for its association with the University of South Wales, originally established as The School of Mines at Treforest in 1913.[2]

The population of Treforest consists substantially of students living away from home, who often leave the village during the summer months and return in the new academic year. Treforest is home to association football team Treforest Town F.C., this mid-sized semi-professional club has a purpose-built stadium and club facilities. 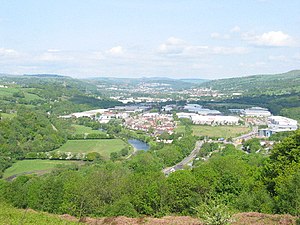 The Treforest Trading estate, later renamed Treforest Industrial Estate, originated with the formation of the 'South Wales and Monmouthshire Trading Estates Ltd.' in June 1936. This non-profit making company aimed to establish one or more trading estates in Wales, and the first sod was cut on 29 December 1936. By the end of 1937, three small factories had been completed and occupied. The first building contract awarded was a large factory for the British Coated Board and Paper Company Ltd (Wiggins Teape).

During World War II, the factories on the estate played a major role in the war effort and national economy; many buildings were requisitioned by the Government and their occupants re-housed in makeshift buildings away from the estate. Extensions and new factories were built by Government departments.

Many of the companies on the estate were established by businesspeople who had arrived as refugees from nazi-dominated Europe. They had often been able to bring money and equipment with them.

By 1944, almost 16,000 people were being employed on the Estate. In 1960, the Estate came under the control of the 'Welsh Industrial Estates Corporation' and later the Welsh Development Agency.

Companies which have operated factories on the estate include BOAC, Aero Zip, Metal Alloys Ltd, Finetex Ltd and Ford.

TV series Doctor Who, Torchwood and Sarah Jane Adventures were filmed at Upper Boat Studios on Treforest Industrial Estate, before moving to Roath Lock studios in Cardiff Bay in 2011.

A number of places of worship exist in Treforest. The University of South Wales offers a chaplaincy service. The chaplaincy also occasionally provides services in conjunction with Castle Square United Reformed Church. Other Christian churches in the village include St Dyfrig's Roman Catholic church off Broadway and Calvary Baptist Church off Wood Road. There are over two old Synagogues not in use any more.