Tolleshunt D'Arcy is a village and parish in the Thurstable Hundred of Essex. It is a small village situated on the Blackwater estuary, about 12 miles south-west of Colchester. 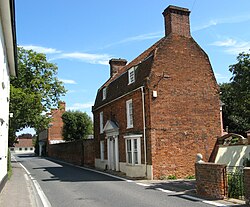 South Street, D'Arcy House is at the far end

The name Tolleshunt originates from the Anglo-Saxon Tolleshunta which means Toll's spring. Toll was an Anglo-Saxon chief who settled in large areas of forest, establishing clearings where water was readily available.[2]

William the Conqueror gave the manor to Ralph Peverell for services rendered during the Conquest. The latter part of the village name altered as female heirs changed the name to that of their husbands. It became known as Tolleshunt Tregoz, Tolleshunt Valoines and Tolleshunt de Boys. John D'Arcy married a daughter of the De Boys family. By this match the estate came to the D'Arcy family in the 15th century. It remained in the family until the death of Thomas D'Arcy in 1593.[2] During that period, D'Arcy Hall, an early 16th-century building, was built as the family home and still remains. The interior is made from wood panelling bearing Anthony D'Arcy's initials and the date 1540. The bridge on the moat dates from the Elizabethan period as does the dovecote in the grounds. The russet D'Arcy Spice apple originated from the gardens in 1840.[2] In the centre of the village is a Maypole which is a listed monument, and is one of the only genuine Maypoles remaining in the country. The base is now protected by a wooden cage.[2]

D'Arcy House is a well-proportioned Queen Anne style dwelling, and was the home of Dr John Salter from 1864–1932.[2] Born in 1841, the eldest son of a country gentleman, he had a long and varied career. Salter was a prize-winning horticulturist, Vice-President of the Kennel Club, and became Provincial Grand Master of the Freemasons. He is best remembered for his diary which he kept from 1849 until 1932.[2]

From 1935 until 1966 the house became the home of the author Margery Allingham, creator of the fictional detective Albert Campion.[3] Her memoir The Oaken Heart (1941) was based on life in the village of Tolleshunt D'Arcy during the Second World War.[3] Her husband, Lt-Col. Philip Youngman-Carter, was a skilled illustrator who followed a spell as Features Editor for the Daily Express with ten years as editor of Tatler.[2]

Tollehsunt D'Arcy House, now has a blue plaque commemorating Margery Allingham. The plaque was unveiled on the 88th anniversary of her birth by her sister Joyce on 20 May 1992. Allingham is buried in the newer village cemetery, about half a mile south of St Nicholas's Church graveyard on the other side of the road.[3]

Tolleshunt D' Arcy still retains its village shop an important feature of village life; as are the church, the village hall and the remaining public house, the Queen's Head, which is on the Campaign for Real Ale's National Inventory of Historic Pub Interiors.[4] The Red Lion public house became an Italian, then an Indian restaurant.[5] The Thatcher's pub in South Street was demolished for a new housing development in 2011. From 1904 to 1951 the village was served by the Kelvedon and Tollesbury Light Railway, with a small station to the north of the village.[6] The whole line closed for passengers on 5 May 1951 with goods traffic continuing between Tollesbury Pier and Tiptree until 29 October 1951. The section between Tiptree and Kelvedon continued in use for goods traffic until 28 September 1962.[6]

The parish church of St Nicholas is in the Perpendicular style with a west tower, and a nave ceiling which was decorated in 1897 by Ernest Geldart. Villagers have contributed to a stained glass window to celebrate the millennium. The window represents the village, the nearby River Blackwater, and the surrounding industries of agriculture and horticulture. The village's unique apple variety is also depicted. A local artist, Michael Smee, designed the millennium window.[2]

Tolleshunt D'Arcy has one primary school on Tollesbury Road called St Nicholas C of E School.[7] This school serves the villages of Tolleshunt D’Arcy, Tolleshunt Major, Tolleshunt Knights, Goldhanger and Little Totham. The school is situated in the centre of Tolleshunt D'Arcy village and has acres of open grassland, a playground and a wild-life area. It is surrounded by farmland and has views over the Blackwater Estuary.[7] 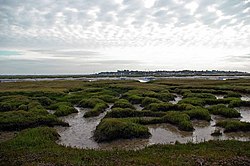 Thousands of anthills of the yellow meadow ant can be found in the ancient grasslands of Old Hall Marshes as well as around twenty-four species of butterfly. Dragonflies are also popular in this area which include the scarce emerald damselfly and good numbers of ruddy darters.[10]

In spring, a variety of birds can be seen, including gadwalls, shovelers and pochards, which can be seen in the open water and in the ditches; lapwings, avocets, oystercatchers and redshanks nest in the marshes; marsh harriers and barn owls can also be found. Migrant waders and whimbrels can also be found in the grassland.[10]

In autumn Teals and Wigeons are most popular seen in the shallow open waters, as well as flocks of Golden plovers and Lapwings. In the winter months hen harriers, merlins, brent geese can be found in the grazing area with short-eared owls are found hunting in the grazing marshes. Sea ducks including red-breasted mergansers, grebes, divers and goldeneyes can be found in the estuarine channels. Snow buntings and twite can be seen on the seawall.[10]

Tolleshunt D'Arcy Hall is a moated house situated south of St Nicholas' Church. The house was originally the home of the D'Arcy family. The building was started by the D'Arcy family who intermarried with the De Boys family in the 15th century. The house was built in 1450. It is possible that the original bridge over the moat was a drawbridge, however the present bridge of brick and stone dates from about 1585. The entrance to D'Arcy Hall contains a row of apple spice trees now known as the D'Arcy Spice Apple. These apples was first found in the garden of the hall at Tolleshunt D'Arcy in 1880; the apple is a late russet variety which is picked in November.[12] 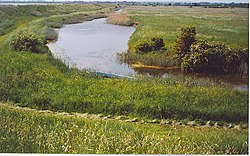 The area has over three hundred remains of prehistoric and Roman salt making sites, called Red Hills, which are found along the Essex coast. This site is now situated in eroding salt-marsh outside the modern sea-wall, and inspection on the ground shows that layers of broken briquetage survives above layers of charcoal which are the remains of ancient fires.[12]

The village once had its own railway station on the former Kelvedon and Tollesbury Light Railway line. Today, however, the closest stations are at Witham or Hatfield Peverel on the Great Eastern Main Line between London Liverpool Street and Norwich.[13]