Thorganby is a small village in the East Riding of Yorkshire, found sitting three miles from the village of Wheldrake. According to the 2011 census the village had 330 residents.

The village is in the Ouse and Derwent Wapentake of the East Riding, on the west bank of the River Derwent. 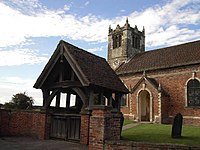 A church is first recorded in 1228, when the advowson was appointed to Robert de Meynell.[1]

However, the present structure, the Church of St Helen, which is a grade I listed building, dates from the 15th century.[2] The church is in the ecclesiastical parish of Thorganby, which is in the Diocese of York.[3]

The village is mentioned in the Domesday Book as Torgrembi and was listed as belonging to Ralph Paynel.[4] The name 'Thorganby' derives from a personal name, being the Old Norse Þorgrims by meaning 'Thorgrim's farmstead or village'.[5]

The nearest railway station in the 19th century was Escrick, some five miles to the west.[6] However, in 1913, Thorganby gained its own station on the newly opened Derwent Valley Light Railway, which provided a link between York and Selby.[7] The station closed in 1926 to passengers, but remained open until 1964 for goods traffic.[8]

The film star Robert Redford visited a pub in the village with friends in March 2011 while in Britain to promote the Sundance London Film Festival. [9]