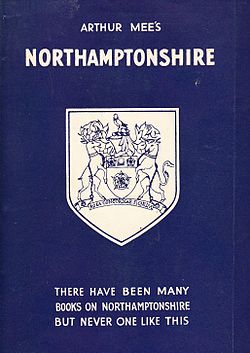 The Northamptonshire volume in the original cover style

The King's England is a topographical and historical book series written and edited by Arthur Mee in 42 volumes, the first published in 1936. It was said that the series was a modern Domesday Book and that the compilers had travelled half-a-million miles in order to complete their task.

The first volume was an introductory volume named Enchanted Land: Half-a-million miles in the King's England, which was followed by a book for each county with occasionally two sharing a volume and for each riding of Yorkshire. The series covered however only the counties of England, including Monmouthshire.

The books are written in Arthur Mee’s own style, looking for the most part at each town and village in the shire with a short section on each, about the character of the place and historical vignettes.

In 1989, The King's England Press was established to reprint the series.

The first title in the series, the introductory Enchanted Land: Half-a-million miles in the King's England, was published by Hodder and Stoughton in 1936.[1] There followed the forty county volumes.

In 1970, the London volume was split into three. Bomb damage during the Second World War, the subsequent post-war reconstruction and alterations to local government boundaries in 1965 all made it difficult to properly treat London in one volume.[2] The new volumes, which brought the total to 42, were:

In 1989, The King's England Press was established to reprint the series, "recognising the need for them, both as excellent guidebooks and now with the added dimension as historical documents in their own right."[3]