Tellisford is a village and parish in Somerset, standing on the banks of the River Frome in the Mendip Hills. It is six miles north-east of the town of Frome. The civil parish incorporates the ancient parish of Woolverton as well as that of Tellisford itself.

Tellisford is within the Wellow Hundred while Woolverton is in the Frome Hundred.[1]

There is a weir on the Frome here, and an Environment Agency monitoring station in the village. The bridge, which dates from the 17th century, is a Grade-II listed building.[2]

Tellisford Mill on the river is a water mill recently converted to hydroelectric power generation.

Tellisford is one of the Thankful Villages which lost no men in the Great War. 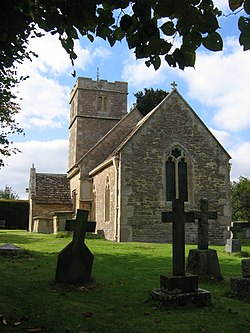 The Church of All Saints dates from the 12th century and is Grade-II listed.[3]

The Church of St Lawrence in Woolverton dates from the 14th century.[5]

The village was known as Tefleford in 1001 and Tablesford in 1086 meaning Theabul's ford or ford at a flat place.[6]

The manor was acquired by the Hungerfords of Farleigh Hungerford in the early 15th century who used the fulling mill to endow their chantry chapel. The cloth making industry continued until 1911.[6] It was largely destroyed by a serious fire in 1785.[6]