Swarkestone Bridge is a mediæval bridge crossing the River Trent between the villages of Swarkestone and Stanton by Bridge, about six miles south of Derby. It is Grade-I listed and a Scheduled Ancient Monument. 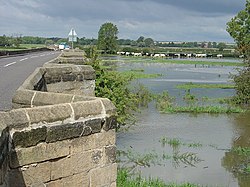 The bridge was built in the 13th century to cross the river and the surrounding marshes. The first mention of the bridge was in 1204 (known as "Ponte de Cordy"), but in part has been modified, repaired and rebuilt; the majority of the existing bridge dates from the late 13th and early 14th century.[1][2]
The bridge and causeway was part of the King's highway between Derby and Coventry. This had been the main route between the two since before the Norman Conquest, and there had been a river crossing on the site.[1]

The original bridge is thought to have been made of wood, and was then rebuilt in stone at the end of the 13th century. Three Royal grants of tolls for bridge repair were granted between 1324 and 1347.[2]

The section of the bridge crossing the main flow of the river was destroyed in floods in 1795 and was replaced between 1795 and 1797, at a cost of £3,550, with the present section of bridge.[2] The work was reputedly designed by Thomas Sykes, the County Surveyor. However, according to Nikolaus Pevsner, it was designed by Thomas Harrison.[3] 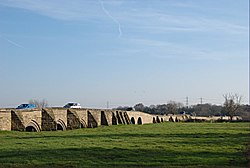 The bridge has proved itself of strategic importance throughout the ages. It was for about 300 years the Midlands' main crossing of the Trent, and the only crossing between Burton-on-Trent and Nottingham. The road over the bridge was the main road into Derby from the south until the 18th century. In January 1643, it was the location of the minor battle during the Civil War. In the Battle of Swarkestone Bridge the bridge was defended by the Royalists against the Parliamentarians, but the outnumbered Royalists lost the day.[2]

In 1745, Swarkestone Bridge was the southernmost point of Bonny Prince Charlie's advance on London, in his attempt to claim the British throne.[1] Finding no reports of support from the south, they turned back to Derby and then retreated to their final defeat at the Battle of Culloden.[2] During the Second World War, it was defended by gun emplacements and tank traps in case of a German invasion.[1] 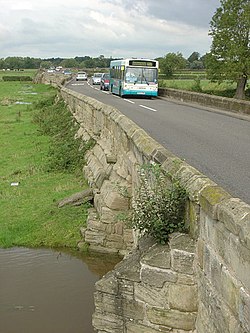 The bridge has been widened several times (the first in 1799 and recorded works in 1808, 1830 and 1852), but is undersized for modern traffic; in several places it is scarcely two-lanes and cars are unable to pass at several points.[1]

Though there is a weight limit of 7½ tons, the walls of the bridge often take damage from traffic. In 2017, electronic weight sensors were placed at either end of the bridge to deter vehicles over limit.

The bridge is the subject of several local legends. Its construction was said to have been financed by the two Bellamont sisters. Both had become engaged and were to throw a joint celebration; their fiancés, however, had to meet with the local barons on the far side of the river. Following a storm the Trent became swollen. Eager to return to their brides-to-be and their party, the men tried to ford the river on horseback. Both were swept away and drowned. The Bellamont sisters commissioned the bridge so that no one else would suffer the tragedy they had suffered. Neither sister married and both died in poverty having exhausted their fortune on building the bridge.[4]

The bridge is supposed to be haunted by the ghosts of the two Bellamont sisters. Others have alleged the bridge is haunted by Bonny Prince Charlie's troops. The most commonly reported phenomenon is the sound of horses approaching at speed when there is nothing about. Another legend says that the river must claim 3 lives every year in order for it to be 'pacified'.[4] The bridge is a local accident black-spot, with 15 reported road-traffic accidents between 2008 and 2010.[5]