Richmond Castle is a remarkable mediæval castle standing in the midst of the town of Richmond in the North Riding of Yorkshire, a town which owes its origin to the castle. The castle stands in a commanding position above the River Swale, close to the centre of the town. It was originally called 'Riche Mount', maning "the strong hill".

Richmond was built from 1071 onwards following the Norman Conquest of England: the Domesday Book of 1086 refers to 'a castlery' here. The town is named after the castle around which it formed, though the Domesday Book uses an older name: Hindrelag

The tower of the castle keep stands a hundred feet high. 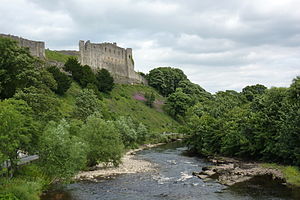 Richmond Castle from across the River Swale

In 1069 William the Conqueror had put down a rebellion at York which was followed by his brutal punitive campaign, the "harrying of the North", which depopulated large areas for a generation or more. As a further punishment, he divided up the lands of the North Riding of Yorkshire among his most loyal followers. Alan Rufus of Brittany received broad estates and feudal authority in the north of the county, and he created a capital here at Richmond. He began building the castle to establish his personal power base. Alan's holdings, called the Honour of Richmond, covered parts of eight counties and amounted to one of the most extensive Norman estates in England: in Yorkshire they became known as Richmondshire. After Alan's death, his estates fell to his brothers and eventually to his relatives the Dukes of Brittany, who held the castle and the Earldom of Richmond until their holdings were confiscated during the wars in France. 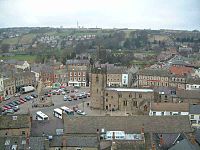 The view from the keep

A hundred-foot high keep of honey-coloured sandstone was constructed at the end of the 12th century by Duke Conan IV of Brittany. The Earldom of Richmond was seized in 1158 by King Henry II during a war in Brittany over succession to the Breton throne. It was probably King Henry II who completed the keep, with its eleven-foot thick walls. Modern visitors can climb to the top of the keep for magnificent views of the town. At the same time that the keep was probably completed, Henry II considerably strengthened the castle by adding towers and a barbican. Henry III and King Edward I spent more money on the site including Edward's improvements to the keep interior.

In addition to the main circuit of the wall, there was the barbican in front of the main gate which functioned as a sealed entry space, allowing visitors and wagons to be checked before they gained entry to the castle itself. On the other side of the castle, overlooking the river, was another enclosure or bailey called the Cockpit, which may have functioned as a garden and was overlooked by a balcony. A drawing of 1674 suggests there was another longer balcony overlooking the river side of Scolland's Hall, the Great Hall. 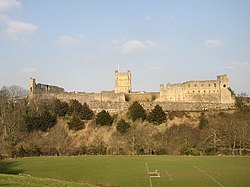 The castle from the south

Richmond Castle had fallen out of use as a fortress by the end of the 14th century and it did not receive major improvements after that date. A survey of 1538 shows it was partly in ruins, but paintings by Turner and others, together with the rise of tourism and an interest in antiquities, led to repairs to the keep in the early 19th century.

In 1855 the castle became the headquarters of the North Yorkshire Militia, and a military barracks block was constructed in the great courtyard. For two years, from 1908 to 1910, the castle was the home of Robert Baden-Powell, later founder of the Boy Scouts, while he commanded the Northern Territorial Army but the barracks building was demolished in 1931.

The castle was used during the First World War as the base of the Non-Combatant Corps made up of conscientious objectors - conscripts who refused to fight. It was also used to imprison some conscientious objectors who refused to accept army discipline and participate in the war in any way. These included the "Richmond Sixteen" who were taken to France from the castle, charged under Field Regulations, and then sentenced to death, although their death sentences were commuted to ten years' hard labour. 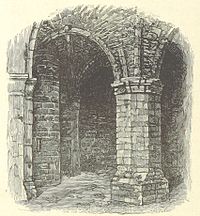 An illustration of the dungeon of the keep

As presented today Richmond Castle has one of the finest examples of Norman buildings in Britain including Scollands Hall, the Great Hall of the castle. The keep has a restored roof and floors but is shown with the original 11th-century main gate arch unblocked. This arch is now in the basement of the later 12th century keep which was built in front of it, the main gate then being moved to its present position which was dominated by the adjacent keep while the original arch we see today was filled-in to secure the keep.

The castle is a Scheduled Monument,[1] a "nationally important" historic building and archaeological site which has been given protection against unauthorised change. It is also a Grade I listed building.[1]

Today the castle is in the care of English Heritage, which provides a visitor centre for the castle with an informative exhibition containing artefacts from the castles history. They also hold frequent events there throughout the year.

The Dukes of Brittany were keen to investigate and to promote the legends of King Arthur, which were part of the heroic tradition of the Britons and Bretons, and Richmond formed a backdrop. According to legend, King Arthur and his knights are sleeping in a cave underneath the castle. It is said that they were once discovered by a potter named Thompson, who ran away when they began to awake. Another legend tells that a drummer boy was lost while investigating an underground tunnel, and that his ghostly drumming is sometimes heard around the castle.[2] 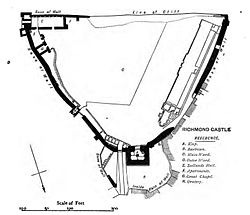 A plan of Richmond Castle's main enclosure, keep, and the small enclosure around the keep. The outer enclosure is off to the east

The Legend of the Drummer-boy

Legend tells that nearly 200 years ago some soldiers found an entrance to a tunnel near the castle keep. They could not fit into the tunnel so they elected to send a regimental drummer boy. The boy was asked to walk along the tunnel and beat his drum so that above ground the soldiers could follow the noise. They did this for 3 miles before the sound stopped unexpectedly. This was never explained and today a stone marks the spot the noise stopped. More confusingly the entrance can also not be found.

Today schools celebrate this local legend with children marching through town annually. Legend claims that on some cold nights you can hear the faint sound of the drummer boy still.

The legend of the Drummer-boy, combined with that of King Arthur sleeping in a cave beneath the castle, were combined to form the plot of the children's novel Earthfasts.