Stroma is an island of 927 acres in the Pentland Firth, halfway between mainland Caithness the isles of Orkney. The island is part of Caithness, though geographically it may be reckoned part of the Orkney group. It is the more southerly of the two islands in the Firth between Orkney and mainland Caithness, with Swona to the north, which belongs to Orkney.

The island's is from the Old Norse Straumey meaning "island in the stream" or "current". A lighthouse at the northern end of the island warns ships of the nearby Swilkie whirlpool. Once populous, this uninhabited island is owned by a Caithness farmer who uses it to graze sheep. Stroma is about 2½ miles long by a mile wide, rising to just 174 feet above sea level on Cairn Hill. 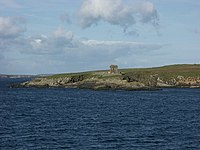 The vault and doocot on Stroma

In the past Stroma had a population of about 550, which by 1901 had reduced to around 375. The population continued to decline through the 20th century, and most of the last residents left in the early 1960s to work on the construction of the Dounreay power station. The last two families left around 1962. Coincidentally, this was shortly after the construction of a new harbour at the south end of the island.

The number of ruined houses shows how well populated the island was at one time. In the centre of the island is a church with a bell tower. Next to the church is the manse which is kept habitable for use by visiting shepherds, particularly at lambing time. At the south east corner, not far from the new harbour, is a walled graveyard with mausoleum, which is the tomb of the Kennedy family who owned the island in the 17th century. Stroma is now a conservation area with an area fenced off to protect the rare plants from the sheep.

The slipway at the north east of the island is still in use: the boat used to transport the sheep is pulled out of the water for the winter. In summer this and another boat transport day visitors to the island from Gills Bay as well as carrying those working with the sheep.

Stroma, from the mainland 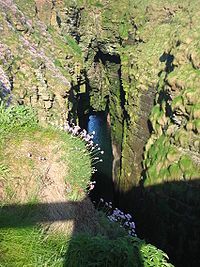 The island is in the tidal stream in the Pentland Firth, and there are tidal races at both the north and south ends of the island, easing briefly at the turn of the tide. The race at the north end, off Swilkie Point, known as 'The Swilkie', can be particularly violent.

The whirlpool of the same name was, according to a Viking legend, caused by a sea-king called Mysing. He stole a magical quern from King Frode, but Mysing's land subsequently sank near Stroma under the quern's weight. However, he continued to turn the mill wheels in the depths which grind the salt to keep the seas salty, and the noise of the whirlpool is the sea still roaring through it.[1] Between the races is a calm eddy which extends down tide as the tide strengthens. The races are easily visible with over falls and whirlpools. Large swell waves can also be present, especially in bad weather. When entering or leaving the eddies, even large and powerful vessels can be pushed off course.

There are about sixty known shipwrecks around Stroma, the latest of which, the Danish coaster Bettina Danica, occurred in 1994.[2] No one was killed, and the vessel remained intact until about 1997. As of 2006, only the stern section could be seen on its side at the foot of the cliffs on the west side of the island near its southern tip.

In 2004, a group of thirteen people on the island tour boat 'North Coast Explorer' was rescued by lifeboat.[3]

The dangers of the Swilkie whirlpool in the Pentland Firth led to the building of the Stroma Lighthouse at the northern tip of the island at the end of the 19th century. The light was designed by David and Charles Stevenson, and has 80 steps to the top of the tower. The original Trotter-Lindberg petroleum spirit light was found to be insufficient for the location and was replaced with a stronger paraffin lamp.

The lighthouse buildings were machine-gunned by an enemy aeroplane during Second World War. No-one was injured during the attack, which took place on 22 February 1941, and the damage was easily repaired by the lightkeepers.

In 1972, the lighthouse was converted to electric operation, and a helicopter landing pad was built near the station to facilitate maintenance and the changeover of keepers. In April 1994 conversion to automation began and this was completed in March 1997.[4]

Being uninhabited, there is no regular access to the island. However the ferry from Gills Bay near John o' Groats to St Margaret's Hope usually passes close to the island. A boat from John o' Groats also visits the island on wildlife adventure tours during the summer months. There exist outline plans to connect Orkney to the Scottish mainland by tunnel; two of the possible routes are across Stroma.[5]

Transport to the island can be arranged by contacting the owner, James Simpson.

Local stamps have been issued for Stroma since 1962, following on the closure of the GPO sub-post office in 1958. The stamps served the many visitors to the island who wished to have their mail posted there, and carried to the nearest GPO Post Box at Huna, near Wick, on the mainland. These stamps are keenly sought after by collectors of British Locals. [6]