Strandhill or occasionally Larass is the largest coastal village and townland in County Sligo.[2] The name Larass is derived from the Irish an Leathros.[3]The old name appears to be Ros Dragnige (see Killaspugbrone).

Strandhill is situated at the western base of Knocknarea on the Coolera peninsula in Sligo Bay, five miles west of the county town, Sligo, and is Atlantic facing. Although the main part of the village lies within the townland of Strandhill, it also extends into the townlands of Killaspugbrone and Carrowbunnaun. The area is well known for surfing.[4] 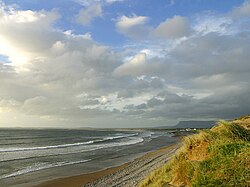 Strandhill's surrounding areas include the mountain of Knocknarea, Coney Island, Culleenamore beach, and Dorrins Strand. Much of the terrain consists of marram–covered dunes, and the local council has had to undertake various measures throughout the years to combat coastal erosion.[5]

Standhill has a caravan park, pubs, restaurants/cafes, St Asicus National School, St Patrick's Church, St Anne's Church of Ireland and the Strandhill surgery. The village has multiple hostels, the Ocean Wave Lodge, The Dunes Tavern and SurfnStay Lodge and Hostel. There is also the Strandhill Lodge and Suites. 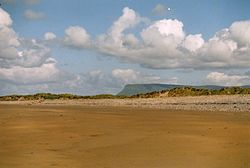 Strandhill is a vast beach break capable of holding huge waves in the right conditions. Surfing is usually best when the tide is on the push in from mid to high tide. At low tide only a big swell will provide a decent wave, whilst at high tide the waves tend to rebound off the promenade, reducing the power and form closer to shore. This rebound effect at high tide can also make for unusual currents or rips with large erratic barrelling waves that slam against the rocks.[4][6]

Strandhill has an association football club named Strand Celtic and Sligo Rugby Football Club is based in Hamilton Park, where tag rugby is also played.[7] Coolera/Strandhill GAA club involves Strandhill and the neighbouring parish of Ransboro, and also field a hurling team.

Strandhill has a renowned beach for surfing, but is it not safe for swimming.[9] The nearby strand at Culleenamore is suitable for paddling.[10]