Knocknarea is a large hill west of Sligo, the county town of County Sligo. The name is from the Irish Cnoc na Riabh.[1]

The 1,073-ft-high limestone hill is visually striking, as it is monolithic in appearance and stands in a prominent position on the Cúil Irra peninsula between the bays of Sligo and Ballysadare. At the summit is a large mound (or cairn) of loose stones. Although it has not been excavated, it is believed to conceal a Neolithic passage tomb.[2]

Knocknarea is an anglicization of an Irish name. "Knock" means hill, but the etymology of the rest of the name is disputed. The Placenames Database of Ireland gives the Irish name as Cnoc na Riabh (meaning "hill of the stripes").[2] However, P.W. Joyce preferred the interpretation Cnoc na Riaghadh ("hill of the executions"). Cnoc na Riogha ("hill of the kings") has also been suggested,[2] as has Cnoc na Ré ("hill of the moon").

On the summit of Knocknarea is a large cairn about 180 feet wide and 33 feet high, making it the largest such cairn in Ireland outside the Brú na Bóinne complex in Meath. Although it remains unexcavated, and is one of the biggest of such monuments still unexplored, it has many of the features of a classic passage tomb.[3] It is known in Irish as Meascán Méabha[2] or Miosgan Meadhbha[4] meaning Medb's Lump (Miosgán means a lump or pat, especially of butter). In English it is known variously as Medb's Cairn, Medb's Tomb, Medb's Nipple or Medb's Grave (sometimes the name Medb is anglicized as Maeve). It is believed to date to around 3000 BCE.[4] Meabh is a figure in Irish mythology who features in stories dating to the early first millennium CE. Archaeologist Stefan Bergh, in his book Landscape of the Monuments (Stockholm 1995), suggests that a large depression some distance to the west of the mound was the quarry from which the limestone for the monument was taken.

Meabh's Cairn, though by far the largest, is only one of a number of monuments on the summit of Knocknarea. In general the tombs are lined up North-South, and they may have been constructed to face Carrowmore in the lowlands. Many of the smaller tombs seem to have been small passage tombs; they were severely damaged by the excavations of antiquarians in the 19th century.[5] 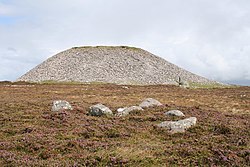 Meabh's cairn at the summit of Knocknarea

Knocknarea seems to have been a major place of ritual and meeting in the Neolithic era. The entire top of the mountain on the eastern side is circumscribed by a 1,000-yard-long embankment, six feet wide and 2 ft 7 in tall. Hut sites have been located on the inside of this area. A large amount of debris from making stone tools has been collected.[5]

The area around Sligo Bay is rich in pre-historic remains, and shares similar monuments and natural shapes. From Knocknarea can be seen other sites such as Croaghaun Mountain, Carrowkeel Megalithic Cemetery, and Cairns Hill. Carrowmore passage tomb cemetery is located at the eastern foot of Knocknarea.

Strandhill, the coastal resort, lies at the western foot of Knocknarea. Cullenamore, an extensive beach area, is further south, and the southern aspect from Knocknarea overlooks Ballysadare Bay.

Conservation issues regarding Knocknarea and Meabh's Cairn have been discussed in the local press.[6] Large visitor numbers are causing damage to the cairn. Visitors are asked not to climb on the cairn, and not to take stones from the cairn. 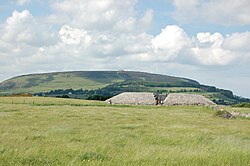