Stow Longa is a small farming village in Huntingdonshire, found on the lane running uphill south from Spaldwick. It is Stow Longa is built around its Green on which stands a mediæval cross.

Stowe Longa is in the west of the county two miles north of Kimbolton and close to the county border, standing near Tilbrook, Bedfordshire.

The original name of the village was just Stow or Long Stow, which simply means "Long Place", and this was rendered in Latin as Stow Longa, for the purpose of church documents before the Reformation. The village retains the Latin name to distinguish it from the village of Long Stowe not many miles away in neighbouring Cambridgeshire.

Stow was thought to have been the name of the pre-Conquest estate, which, in the Middle Ages was split between two parishes: Over Stow or Upper Stow as the western part, which belonged to the Kimbolton parish; and Estou (also Nether Stow or Long Stow), the eastern part, which was part of the soke of Spaldwick.

Stow Longa is often described as a hamlet, but it is somewhat more substantial. It has a respectable number of houses and businesses such as to qualify it as a village, and it has a church, St Botolph’s. Nevertheless, Stow has no village shop, school nor pub, nor street lamps nor drains. It does have several pretty thatched cottages, a village room, a blocked-up well (on the village green), a stone cross and mature elm trees.

According to a locally published collection of short stories, 'Ploughing Songs' by Damian Croft,[1] the reason why the pubs that were in Stow Longa were closed down in the 1950s was because, "returning drovers used it to give a bad name to a few otherwise nameless women."

Before it was transferred to the Spaldwick parish in 991, the Stow estate had belonged to Byrhtnoth, Ealdorman of Essex, who famously died fighting the Vikings at the Battle of Maldon in 991. Bryhtnoth left his two estates, Spaldwick and Somersham, to the Abbot of Ely.[2] 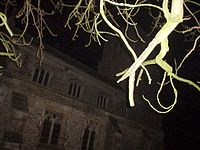 The parish church of Stow Longa is known as St Botolph's. It dates to the 13th century, though a stone slab with inter-laced works (probably pre-Conquest) on the south-side indicates an earlier date.

Though peaceful and fairly hidden today, the church in Stow Longa has had a remarkable history. Stow Longa was confirmed a prebend by Pope Eugene III on the 6th February 1146, and again by Pope Alexander III on the 5th January 1163.[3] A minster or mother-church of the local estate (which included Stow Longa, Spaldwick, Easton, Little Catworth, Barham and Upthorpe) before its importance was subsumed by Spaldwick and Kimbolton, St Botolph's wealth and importance attracted noted figures to the prebendary, such as Thomas Wolsey, who was Stow Longa's prebend from 1509 to 1514.

Above the priest door, outside the east side of the church, is the nationally famous stone carving known as the Mermaid Stone (or the Beckoning Mermaid Stone), since the engraving displays a mermaid between two creatures.

The village cross stands on the green. It is Mediæval. A local idea has grown up that it marks where the coffin of Catherine of Aragon rested, after she died at nearby Kimbolton Castle, though the cross was there long before the Queen saw Kimbolton. 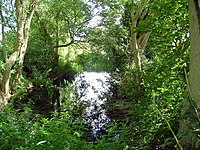