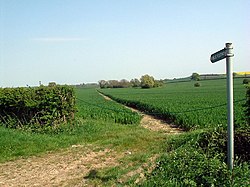 Field and footpath near Pertenhall

The boundaries of the hundred of Stodden are of an irregular character. The parishes of Clapham, Oakley and Milton Ernest are completely detached from the main portion, and the Huntingdonshire parish of Swineshead interjects itself west of Pertenhall. 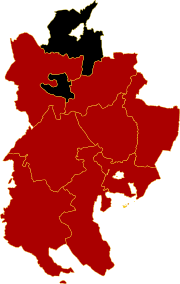 At the Domesday Book of 1086, this hundred was assessed at 99⅔ hides, valued at £146 15s, an increase since the £127 14s. 4d yield in the reign of Edward the Confessor. Included in these yield figures though estimate are 9 hides and 3 virgates, the subject of ten separate entries, under 'Estone', which J H Round identifies with Easton in Huntingdonshire and also 2½ hides and 1 virgate in Stanwick and Newton Bromswold respectively, both in Northamptonshire. Included also are 1 hide, 1 virgate in Elvendone, 1 hide in 'Hanefeld' and 1 virgate in 'Segresdone,' none of which places has been hitherto identified.

Stodden was a royal hundred and remained in the hands of the Crown until Charles I in 1629–30 granted it to Gilbert North and his heirs to be held of the manor of East Greenwich for a yearly rent of £8 6s. In the time of the Commonwealth, Oliver St John Earl of Bolingbroke was lord of the hundred. The rights of the hundred have long since been in abeyance but in theory remained with the St John family, who have for centuries been the principal landowners within Stodden.