Stenhousemuir is a town in the Forth Valley in Stirlingshire. The town is two miles north-northwest of Falkirk and directly adjoins to Larbert in the west. The villages of Carron and Carronshore adjoin Stenhousemuir to the east but to a lesser extent. At the 2001 census, Stenhousemuir had a resident population of 10,351[1] but according to a 2009 estimate this has been revised to around 10,190 residents.

In 2008, a £15 million town centre development scheme was completed and opened which provides a new civic square, a library and large retailing outlets for Stenhousemuir.[2] 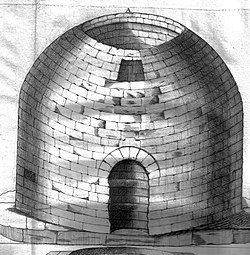 The "stone house" from which the village took its name was a Roman building on the north of the Carron River Valley known in later centuries as Arthur's O'on, i.e. King Arthur's oven. This building fits the description of the "rotunda tabulata" described by Wace in his Roman de Brut of 1155, which may by mistranslation have given rise to the legend of the round table. It is no longer to be seen, having been demolished to rebuild a dam on the River Carron by Sir Michael Bruce of Stenhouse in 1743.[3] The stones were swept away in a flood soon after. However, detailed drawings had been made in the 1720s and a replica was made in 1763 to serve as a dovecote on the roof of the stable block of Penicuik House in Midlothian, and this remains. The site of the original building has been localised to the garden of a modern house on a housing estate, apparently by the American academic Norma Lorre Goodrich (1917–2006). Stenhousemuir became home to the "Falkirk Tryst" from 1785 [3] - one of the largest gatherings of livestock farmers and buyers from all over Scotland and beyond. After the decline of the Tryst in Crieff, the Falkirk Tryst came to be held more frequently, on the second Tuesdays of August, September and October each year.[4] Thomas Gisbourne in his "Essay on Agriculture" described the Tryst in 1849 as "a scene to which Great Britain, perhaps even the whole world, does not afford a parallel".[5] The Trysts continued until the late 19th century.

The town was home to the McCowan’s toffee factory, established in 1922, who made both traditional toffee and also the Wham Bar.[6] 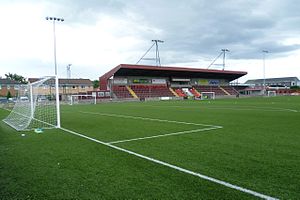 Stenhousemuir has a football team (Stenhousemuir F.C.), a cricket club and a golf club. The Tryst Golf Club, built in 1885, has its clubhouse in Burnhead Road, which is arguably in Larbert.

The Cricket Club has been in existence since 1876 and has a very long and proud history with many successes in national club cricket. It has also produced a number of international player representing Scotland and had a number of notable cricket professionals playing for the club many of whom are noted internationalists for their respective countries also e.g. Abdul Qadir.

Ochilview Park, McCowan's Toffee Factory, Falkirk Tryst Golf Club and Stenhousemuir Cricket Club are all accessible via Tryst Road, a prominent stretch of road leading North out of the village. The street is so called because it was the site of the annual Tryst. On the anniversary of the Tryst in September each year, a travelling funfair comes to the site.

There are two churches in the village: nearer the centre of the village is Larbert East Church with its imposing tower, meanwhile one third of a mile to the east of the village centre on the aptly named Church Street is the Stenhouse and Carron church which is smaller but more unique architecturally, designed in 1897 by the firm of John James Burnet.[7]

The shopping area of Stenhousemuir is currently under renovation, which opened on 29 September 2008. A new library, football pitch and new shops including a 40,000 sq Asda supermarket will be the essence of the development. A further plan for King Street will begin in 2009.[8]