Larbert is a small town and parish in Stirlingshire.[1] The town lies in the Forth Valley above the River Carron which flows from the west. Larbert is three miles from the shoreline of the Firth of Forth and 2½ miles north-west of Falkirk, the main town in the area. The village of Stenhousemuir lies directly east of Larbert, with both settlements being contiguous and sharing certain public amenities with one another.[1]

In mediæval times, the Larbert area was heavily forested, but this was cleared and gave rise to much of the agricultural land which surrounds the town.[2] The coming of industry and especially the arrival in the 1840s of the Scottish Central Railway, which passes through the village, provided a base for economic growth.[3] From the late 18th century until the mid-20th century heavy industry, such as boilermaking, casting and manufacturing underpinned the economy of Larbert.[3] The Victorian era also saw the opening of the Stirling District Lunatic Asylum at Bellsdyke and Scottish National Institution for Children on the Stenhouse Estate. This made Larbert central in providing care, both locally and nationally.[4]

Although the traditional economic base of Larbert dwindled with the decline of heavy industry, it has latterly experienced considerable growth as a commuter town.[5] Many residents work in the nearby towns of Falkirk and Stirling, as well as the cities of Edinburgh and Glasgow. The Census of 2011[6] reveals that the population of Larbert has increased to 9,143 from the 2001 Census figure of 6,425[7] and it continues to grow with large-scale housing development on the northern periphery of the town as well as on brownfield sites.[8]

Historians believe that the origin of Larbert dates back to the Dark Ages. The area in which Larbert lies was heavily forested at this time.[10]

The lands to the south of Larbert and Camelon, in the area traversed by the Antonine Wall, were strategically important to the Romans. The crossing point on the River Carron at Larbert was an important transportation route for the Romans on the road they constructed from Watling Lodge on the Antonine Wall to Stirling.[10] Early Ordnance Survey maps showed Larbert located on an old Roman road between Camelon and Stirling, with the site of a Roman camp close by.[11] An early Christian community, with a chapel, is believed to have existed close to the crossing point on the Carron around 1160.[11]

By the 1750s, Larbert constituted a small settlement on the main road between Falkirk and Stirling, which was turnpiked by an Act of Parliament in 1752.[12] At this time, Larbert had at three mills powered by water from the nearby River Carron. These mills shut down in the 1980s and since then salmon and sea trout have returned in good numbers.[12] The surrounding population, largely scattered, engaged in agriculture and took part in the important Falkirk Tryst (cattle market) held annually in nearby Stenhousemuir. In the 1950s, archaeological excavations to the north of present-day Larbert uncovered remains of a substantial pottery works with eight kilns dating from the 15th or 16th centuries (Hall and Hunter 2001).

Larbert's later growth is tied to the industrial development in the village itself as well as the wider parish.[13] The pivotal event was the opening of the Carron Iron Works to the east of Stenhousemuir, in 1759, which produced a range of cast-iron goods and the Carronade, a naval cannon.[14] The development of the iron works shifted the centre of the parish eastwards as people moved to closer to the Carron Ironworks for employment.[14]

Fortunes changed in the 1840s with the building of the Scottish Central Railway which was a catalyst for economic expansion in Larbert itself.[13] Improved transportation led to Dobbie, Forbes and Company establishing a foundry in Larbert in 1872 which manufactured stoves, ranges and light castings.[15] Three years later, James Jones, a local businessman, opened a sawmill on land adjacent to the Dobbie Forbes and Company foundry, which grew rapidly manufacturing timber frames.[15] By the turn of the 20th century, Dobbie Forbes had a payroll of more than 200 employees.[14] In 1888, a joint venture between Jones and the cashier of Dobbie, Forbes and Company, Dermont Campbell, produced the Jones and Campbell foundry on land close to the railway, which further cemented Larbert's position as a centre of heavy industry.[13] By 1891, the parish of Larbert had a population of 900.[12]

The 19th century also witnessed the establishment of the Scottish National Institution for the Education of Imbecile Children on land to the north of present-day Larbert.[16] The institution, opened in 1863 at a cost of £13,000,[13] provided care for minors between the age of 5 and 21.[16] In 1948 the facility became known as the Royal Scottish National Hospital (RSNH). On adjacent land, the Stirling District Lunatic Asylum, opened in 1869 at a cost of £20,000, engaged in the treatment of those with mental illness.[13] The asylum later became known as Bellsdyke Hospital.[13]

The arrival of the tram in October 1905 improved transport between Larbert and many of its surrounding neighbours.[17] The service followed a circular route through Larbert, Stenhousemuir, past the Carron Iron Works, through Bainsford and to Falkirk. Larbert's new closeness to surrounding communities raised concerns about the loss of village independence.[17] A consortium of local industrialists and residents, fearing higher burgh rates, successfully resisted a 1912 proposal to incorporate nearby villages such as Larbert and Stenhousemuir into the larger town of Falkirk.[17]

Larbert lies at an altitude of 100 ft above sea level.[9] The settlement sits on a shelf of land overlooking the River Carron, which flows to the west.[9] The river has its source in the Campsie Fells north of Glasgow, flowing into the Carron Valley Reservoir and past the village of Denny.[18] After passing Larbert, the river flows through Falkirk before emptying into the Firth of Forth at Glensburgh, near Grangemouth.[18]

The predominant land use in Larbert is suburban.[19] The urban environment of Larbert is a mix of housing styles ranging from 19th- and 20th-century developments to large detached villas built of stone in Victorian times for Larbert's industrialists. Much new housing development in Larbert is on brownfield sites, such as those west of the railway line, on reclaimed foundry land.[19] As a result, little industrial land remains in the village itself. Larbert's surroundings are much more rural in character with scattered farmsteads on land between Larbert and the M9 motorway and between Larbert and the village of Plean. Parkland on the northwest side of Larbert has been given over to the development of a new hospital. The site of the former RSNH and Bellsdyke Hospital is slated for joint residential and commercial development and will be known as Kinnaird Village.[20] There is open parkland south of Larbert.

The southbound platform of Larbert railway station showing the main station building, which dates from 1976

Larbert railway station opened on 22 May 1848, when the Scottish Central Railway built its line through the village and narrowly survived the Beeching cuts of the 1960s.[21] Larbert station lies north of one of the major rail junctions in central Scotland, where the line from Stirling and Perth splits into one branch heading to Glasgow and the other to Edinburgh. The station is on the Edinburgh to Dunblane and Croy Lines. During the day, trains are half-hourly to Glasgow and Edinburgh and take 35 minutes and 45 minutes respectively to reach their destinations.[22] There are four trains per hour to Stirling, which is a journey of 10 minutes.[22]

As late as the 1970s, through traffic from Falkirk and Glasgow passed the outskirts of Larbert.[12] Motorway construction in the area from 1980 onwards ran Central Scotland's important trunk roads close to Larbert. The nearest motorway is the M876, of which Junction 2 is the interchange for Larbert. The motorway connects with the M80, the principal route into Glasgow. The M9, the main route into Edinburgh, passes east of Larbert. The motorway's Junction 7 (Kincardine Bridge) is the nearest interchange for Larbert.

Larbert Old Parish Church stands on the western approaches to Larbert, above the River Carron. The church, designed by the architect David Hamilton, was built in 1820 at a cost of £3,000 using sandstone from a local quarry.[23] The church was built at a time of population growth and increasing prosperity in Larbert and its parish, which necessitated the construction of a more modern place of worship.[23] As Larbert grew during the 19th century, the church again became too small. Major alterations to the building were carried out in the 1880s.[24] An early chapel under the domain of the Abbot of Cambuskenneth is believed to have stood in the vicinity of the present-day church.[25] 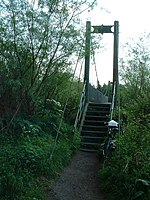 Dorrator Iron Bridge was built in 1893.

At the southern tip of the village, the Dorrator Iron Bridge spans a meander in the River Carron, connecting Larbert with the neighbouring settlement of Camelon. The bridge was constructed in 1893 on the site of a ford, which could rarely be used when the river was in full flow.[26] The bridge is reached via a footpath leading from the bottom of Carronvale Road in Larbert.

Larbert Bridge was the original crossing over the Carron and was built in the 17th century.[27] A toll was collected in the 18th century, payable to the Earl of Callendar and Linlithgow and levied at " ...four pennies Scots for each cart, two pennies for each loaded horse and twelve pennies Scots for each score of droves of cows that shall pass along the said bridge."[27] A later, more modern crossing built next to Larbert Bridge carries the main A9 road from Larbert to Falkirk. Nearby, a 19th-century viaduct, built outside Larbert, carries the railway into town. The main A9 road passes underneath.

The Station Hotel, close to Larbert's railway station, has been a central focal point of Larbert for many years. An inn or public house has stood on the spot of the current hotel for as long as the railway has passed through Larbert.[28]

The Victorian Gothic structures of the Royal Scottish National Hospital (RSNH) and the Stirling District Asylum still exist in a dilapidated state, but most of the grounds are being used for new housing development. Carronvale House is an 18th-century category A listed building, now home to the Scottish Headquarters of the Boys' Brigade.