Staveley is a town in north-eastern Derbyshire, alongside the River Rother, adjacent to Eckington to the north, Barlborough to the east. 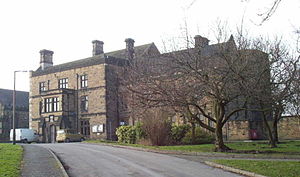 Staveley has traditionally been a mining town with several large mining pits situated in and around the area, with the closest being Ireland Pit (Ireland Colliery Brass Band is named after this colliery). However this pit has now closed down along with the others in the area.

Other major local industries in recent history have included Staveley Works foundry and Staveley Chemicals. The nationwide decline in industry has meant that Staveley Chemicals and Staveley Works have now almost entirely closed, with the only section of the chemical plant remaining being the P-aminophenol plant (a key component to making Paracetamol), which is run by American/Irish company Covidien. Notice has been served on the plant, which closed in 2012, marking the end of over 100 years of chemical production at Staveley.

The New Markham Vale Loop Road has been completed and opens up the former Markham coal field areas to development, linking the town to a new junction (29A) on the M1 motorway, this junction opened in early July 2008. The scheme also reinstates part of the former Chesterfield Canal which crosses the route, with the idea of reinstating the canal from Chesterfield to Kiveton where it currently terminates.

As part of the Markham Vale scheme to regenerate the site of the former Markham Colliery site there was a proposal to build a "Solar Pyramid" to form the worlds largest functional timepiece.[2] This project has now been cancelled. However, on the site near Poolsbrook Country Park, a caravan site for tourists has now been built boosting numbers to the country park. The area has several trails for walkers and mountain bikers along former pit railway lines.