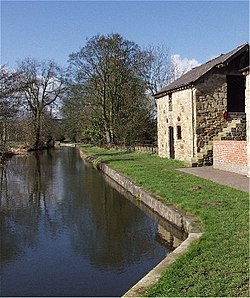 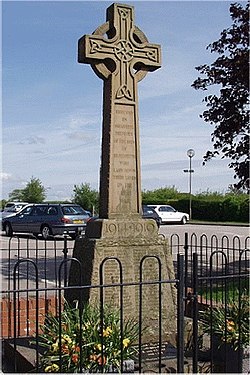 St Martin's is a village and parish in Shropshire, adjacent to the border with Denbighshire, just north of Oswestry and east of Chirk.

The church at St Martin's is dedicated to St Martin of Tours and the parish was part of the Diocese of St Asaph until 1922 when it was transferred to the Diocese of Lichfield.

The area was, for centuries, under the influence of nearby Chirk Castle and, later, the Trevor family of Brynkinallt in Chirk.

Around the 16th century, a bridge was built across the River Ceiriog at Pontfaen. Later the A5, the London-Shrewsbury-Holyhead trunk road was constructed by Thomas Telford through the parish of St Martin's, crossing into Denbighshire via the bridge at Chirk Bank.

The Glyn Valley Tramway ran from Chirk through Pontfaen into the Ceiriog Valley.

In the 19th century a canal was constructed through St Martin's Moor by Thomas Telford linking the industrial areas around Ruabon to the canal network. This now forms part of the Llangollen Canal.

By 1848 the Chester to Ruabon railway line had been extended south to Shrewsbury, but only one station, Preesgweene (later known as Weston Rhyn), was built in St Martin's parish. Later however, branch lines were built to link the collieries in the area to the main rail network.

Although predominantly an agricultural area, coal was mined in St Martin's for several centuries. The collieries at Ifton, Chirk Bank, Quinta, Trehowell, Moreton Hall and Preesgweene were, geologically, an extension of the Denbighshire coalfield. Coal production ceased in the area with the closure of the last remaining colliery in the area at Ifton in 1968. Ifton was the largest colliery in Shropshire and its workings crossed the border into Denbighshire, linking up to the coal seams of the former collieries at Brynkinallt and Black Park.

St Martin's School is a primary and secondary school located in St Martin's.