St Mabyn is a village in Cornwall, three miles east of Wadebridge. The parish includes a hamlet called Longstone to the east and many small manor houses, including Tregarden, Tredethy, Helligan Barton and Colquite, all built in the 16th and 17th centuries. The area of the parish is 4,101 acres.

The parish is named after Saint Mabyn or Mabena, traditionally said to have been one of the 24 children of Brychan, a Welsh saint and King of Brycheiniog in the 5th century.[1]Sabine Baring-Gould however suggests that the true founder of St Mabyn's Church was actually the male Welsh saint Mabon, and the attribution to a female Mabyn came about after the true history had been lost.[2] Davies Gilbert asserts that the name derives from the Cornish compound word Mab-in.[3]

St Mabyn in its fields

The village is centred on the Grade I listed]][4] 15th century St Mabyn Parish Church.

Village amenities include a well stocked independent village store and post office, a public house, a village hall, a primary school, St Mabyn Church of England Primary School, a pre-school, a scout group, a garden club, and a Young Farmers' group. There is a King George's Field in memorial to King George V and a village green.

The village is surrounded by high quality, undulating farmland. The Allen valley to the north-west contains a number of Cornish Nature Conservation Sites. Land to the south-east is designated as an open area of local significance.

The village has however no connection to main sewerage and relies on septic tank drainage.

There was post-war development of local authority housing along Chapel Lane and Wadebridge Road. In the 1980s private housing schemes at Mabena Close and Meadow Court were completed and there was further ribbon development growth along Station Road. A residential development Greenwix Parc, comprising thirty five dwellings including 12 affordable units was completed in 2011. 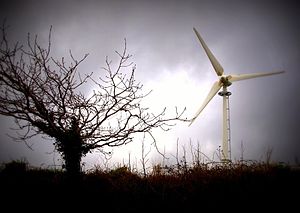 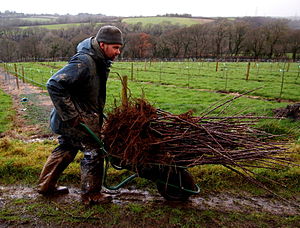 Haywood Farm orchards with Kellow's Farm in the background

Farming is the major economic activity in the St Mabyn, and the parish has several large farms. Most agriculture centres around dairying, with arable crops such as potato and rape and some raising of sheep.

James Mutton of Burlerrow Farm was the first farmer in Cornwall to receive a grant from the Rural Development Programme to process elephant grass (Miscanthus giganteus) which is grown on his 750-acre farm and around the village, the crop is converted into livestock bedding.[5] The farm generates its own electricity with an Endurance 50 kW wind turbine.[6]

Tom Bray produces around 26,000 litres of traditional farm cider a year at Haywood Farm,[8] where he has propagated 5,000 apple trees.[9]

The church comprises a chancel and nave with north and south aisles. The arcades each comprise seven four-centred arches of granite, supported on monolith granite pillars with sculptured capitals of St Stephens porcelain stone. There is a south porch, a north door, and priest's door. The tower is 75 feet high and has three stages. It has a parapet with pinnacles.

The earliest signs of habitation are at the Iron Age hill fort of Kelly Rounds or Castle Killibury. Radiocarbon dating gives a date of occupation between 400 and 100 BC.[12]

The parish is part of the Triggshire Hundred. In the Domesday Book of 1087 this district was taxed under the jurisdiction of Treu-es-coit (translated as "town of the wood", now called Trevisquite). Trethevey in St Mabyn parish was a manor recorded in the Domesday Book as Tewardevi. Both manors were held by Richard from Robert, Count of Mortain. Trevisquite had land for 12 ploughs, 25 households, a mill, 20 acres of woodland and 50 of pasture; its value was 25 shillings a year. Trethevey had land only for one plough, 3 households and 30 acres of pasture; its value was only 2 shillings though it had formerly been 5 shillings.[13] The St Mabyn Trethevey has the meaning "manorial centre on the river Dewey" (Ty war Duwy) unlike other Cornish places called Trethev(e)y.[14]

The inquisition of the Bishops of Lincoln and Winchester in 1294 gave the Cornish benefice "Ecclesia de Maben in decanatu de Trig Minorshire" a rateable value of £8. In Cardinal Thomas Wolsey's inquisition of 1521 it is rated at £36.[15]

Sir Richard Serjeaux of Colquite in St Mabyn became Sheriff of Cornwall in 1389.[16] Below Colquite House is the ruin of a manor house possibly of the late 15th century which may have been a first-floor hall house.[17][18]

The Long Sentry field south east of the church, has been identified as the possible location of the most northerly Plain-an-gwarry or playing place (Plen an Gwari) a Cornish Mediæval amphitheatre it is mentioned in a church terrier of 1613 and 1679.[19][20]

A United Methodist Free Church chapel was built with funding from Richard Hambly Andrew of Tredinnick in 1820 during the incumbency of Leveson-Gower[22] but is now a private house.

St Mabyn's standing stone was broken up for gateposts in 1850 and the stump re-located to the crossroads at Longstone.[23]

The main land owners in 1875, apart from the church, were The Viscount Falmouth, the Trustees of William Molesworth, John Tremayne from Heligan, the heirs of the late John Peter-Hoblyn, Francis John Hext and Mrs. Hooper and Richard Hambly Andrew.[22] There was an annual fair held on 14 February.[24]