St Anne's Cathedral, also known as Belfast Cathedral, is a cathedral of the Church of Ireland in Donegall Street, Belfast, in the part of the city in County Antrim. The cathedral is unusual in that it serves two separate dioceses: Connor and Down and Dromore, yet being the seat of neither. Geographically it stands in the Diocese of Connor. It is the focal point of the Cathedral Quarter of Belfast. 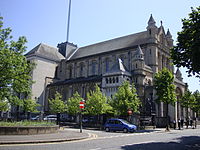 St Anne's Cathedral from the northwest 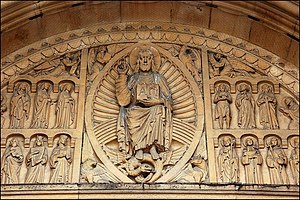 The first architect was Sir Thomas Drew, the foundation stone being laid on 6 September 1899 by the Countess of Shaftesbury. The old parish church of St Anne by Francis Hiorne of 1776 had continued in use, up until 31 December 1903, while the new cathedral was constructed around it; the old church was then demolished. The Good Samaritan window, to be seen in the sanctuary, is the only feature of the old church to be retained in the cathedral. Initially, only the nave of the cathedral was built, and this was consecrated on 2 June 1904.[1]

In 1924 it was decided to build the west front of the cathedral as a memorial to the Ulstermen and women who had served and died in the Great War. The foundation stone for this was laid by Governor of Northern Ireland, the Duke of Abercorn on 2 June 1925 and the completed facade, to an amended design by the architect Sir Charles Archibald Nicholson, was dedicated in June 1927.

In the meantime, the central crossing, in which the choir sits, was built between 1922 and 1924. The Baptistery, to plans drawn up by the late W H Lynn, who had assisted Sir Thomas Drew, was dedicated in 1928, and the Chapel of the Holy Spirit, with its beautiful mosaics depicting Saint Patrick, was dedicated on 5 July 1932, the 1500th anniversary of the arrival of St Patrick in Ireland.

Edward, Lord Carson, the leader of the Unionist cause at the time of the Home Rule Crisis, was buried (with a state funeral) in the south aisle of the cathedral in 1935.

In 1941 the cathedral was almost destroyed by a German bomb, which caused extensive damage to surrounding properties.[2]

In 1955 work began on the construction of the ambulatory, at the east end of the cathedral. This work was dedicated in 1959, but it was not for another ten years that it was possible to begin work on the north and south transepts. The Troubles and inflation led to long delays and major problems with the financing of this work.

In April 2007 a stainless steel spire 131 feet tall was installed on top of the cathedral. Named the "Spire of Hope", the structure is illuminated at night and is part of a wider redevelopment planned for the Cathedral Quarter.[3] The base section of the spire protrudes through a glass platform in the cathedral's roof directly above the choir stalls, allowing visitors to view it from the nave.

In 1976, the Dean of Belfast, Samuel B Crooks, started his annual Christmas 'Sit Out', spending the week leading up to Christmas on the steps of the cathedral, accepting donations large and small from passers-by, which were then distributed amongst many local charities. Dean Crooks soon became known as the "Black Santa", because of the outfit he wore to keep warm. The tradition has been continued by his successors. The week before Christmas each year, the Dean (currently John Mann) and members of the cathedral chapter sit outside the cathedral from 9 a.m. till 5.30 p.m. each day to raise money for charity and are still collectively known as the 'Black Santa'. The tradition has raised several million pounds for charity.[4] 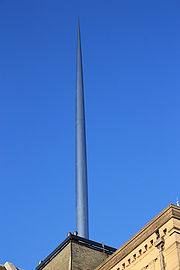 Services are held every day in the cathedral. Morning Prayer is said at 8.10 a.m. Holy Communion at 8.30 a.m., Midday Prayers at 1:00 p.m. and Evening Prayer at 5.30 p.m. on Mondays, Tuesdays, Wednesdays, Thursdays, Fridays and Saturdays (during school terms the 5.30 p.m. services on Monday and Wednesday are choral), Holy Communion is also celebrated at 1:00pm on Wednesdays and Saints' Days and other Holy Days. On Sundays there are four services held in the cathedral, Holy Communion at 8.00 a.m. and 10:00 a.m., Choral Eucharist at 11:00 a.m. and Evensong at 3:30 p.m.

The cathedral's organ, with 4 manuals, is the second largest pipe-organ in Ulster. It was built by Harrison and Harrison in 1907 and rebuilt in 1969-1975. A specification of the organ can be found on the National Pipe Organ Register.