From Wikishire
(Redirected from Sperrin Mountains)
Jump to: navigation, search 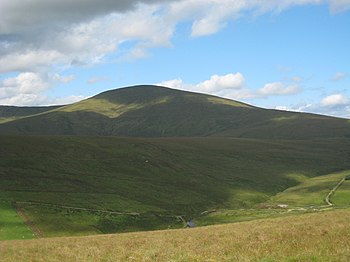 Sawel Mountain, the highest point of the Sperrins

The Sperrins or Sperrin Mountains are a range of hills spread across the counties of Londonderry and Tyrone: little explored, these mountains have dramatic landscapes, bright rivers full of life, rugged slopes, fair valleys, forests and lakes in abundance.

This is the largest range of hills in Ulster, and one of the upland areas of the island of Ireland. The range spans 40 miles and stretches from south of Strabane eastwards to Maghera and north towards Limavady.

The region has a population of some 150,000 and much of it is a designated as an Area of Outstanding Natural Beauty. The name is from the Gaelic Na Speiríní, meaning "the spurs" or perhaps "little pinnacle"[1]

The Sperrins have a distinctive glaciated landscape. The Glenshane Pass, which carries the A6 Belfast to Londonderry through the hills under the looming shadow of Carntogher (1,522 feet), is an ice-cut path. It has notoriously bad weather in winter. 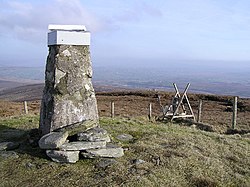 Sawel Mountain is the highest peak in the Sperrins, and the county top of both Londonderry and Tyrone, its summit marking the border of the twain. It rises to 2,224 feet. The hills are popular with walkers, who find undulating hills covered in heather, quiet valleys, boggy uplands and a land teeming with wildlife.

There are 10 summits above 1,600 feet. Hills of the Sperrins include: 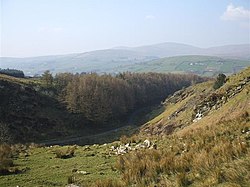 The last ice age has had a great impact on the Sperrins and the great ice sheets that covered the north of Ireland were probably at their thickest over the Sperrins. This area retained its ice sheet for a time after the retreat of the ice began - this has caused many of the present features of the Owenkillew Valley and the Glenelly Valley.

Numerous eskers, formed from sediments deposited by meltwater rivers below the ice, can be found. These are winding ridges, often 100 feet high, made up of sand and gravel. The bedding and sorting of the material indicates that it was laid down in water, rather than the unsorted materials such as boulder clay, laid down by the ice itself. So common are they in Ireland that the Gaelic word eiscir, anglicised to "esker") has been adopted worldwide to describe these remnants of the Ice Age. One of the largest in the Sperrins is Eskermore at Beragh in Tyrone. All of these eskers are of significant value and are exploited for materials for the construction industry.

As the ice retreated in the area, valleys were temporarily obstructed by ice sheets. This led to valleys filling with water which escaped into adjoining lowland. This often resulted in erosional features called glacial overflow channels. Found in many mountainous areas throughout Ireland, some of the best examples are in the Sperrins. The Barnes Gap and Gortin Glen are two such overflow channels. There are also the remains of deltas where rivers fed the glacial lakes. Called kames, a good example is Mossey's Hill above Gortin in Tyrone.

The Sperrins, away from development and generally left alone by mankind, are wild and rich in wildlife. Here there breed birds such as the golden plover, red grouse, buzzard, hen harrier, long-eared owl, peregrine, sparrowhawk, raven, plus crossbill and siskin, in particular in the upland forests of Drum Manor, Gortin Glen, Knockmany, Lough Bradan, Seskimore.

Slieve Gallion in the snow
Retrieved from "https://wikishire.co.uk/w/index.php?title=Sperrins&oldid=38026"
Categories: