Maghera (pronounced mahhərah), is a town in County Londonderry. Its population was 2,876 in 1991 and had risen to 3,711 in 2001. It is a commercial and educational hub for the surrounding villages of Swatragh, Tobermore, Upperlands, Gulladuff and Knockcloghrim. It is located in the parish of Maghera and is part of the barony of Loughinsholin.

The village name is from the Irish language Machaire Rátha, meaning "Plain of the ringfort".

The Slaughtneil and Carntogher area outside the town is unique for being the only rural community in Northern Ireland, and indeed the area on the island outside the Gaeltacht where the Irish language is used as the primary language; this as a result of an effort to revive the language by using it as the teaching medium in schools. 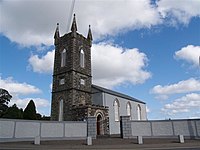 St Lurach's has a large inscribed bronze plate dedicated to the memory of the local men and women who died in the Great War. St Patrick's has a headstone remembering the large number of people who died in the parish during the Great Famine.

The Annals of Ulster say that the seat of the Cenél nEoghain was at Ráth Luraig in Maghera.

The village today is about 70% Roman Catholic, and the sectarian division has led to bloodshed in the past. On Thursday, 19 June 1823, nationalist Ribbonmen began to attack the home of an elderly woman as it was believed the local Orange Lodge held prayer and Bible meetings there. They then proceeded to attack a local Protestant clergyman, severely wounding him before attacking each Protestant home in the locality.[1] 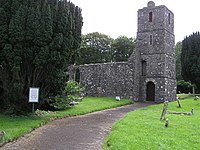 On 12 July 1830, Orange Order marches led to clashes between Orangemen and Ribbonmen in Maghera and Castledawson. Several Roman Catholic homes were then burnt by Protestants following these clashes.[2]

Maghera suffered significant violence during The Troubles. In total, 14 people were killed, half of them members of the security forces and a further two as a result of family membership of the Ulster Defence Regiment. The Provisional Irish Republican Army were responsible for ten of the 14 deaths.

Notable buildings in Maghera include St Lurach's Church, which was founded in the year 500AD, originally as a monastery. The town of Maghera grew up around this church. The importance of the monastery was such that Maghera was a bishop's seat in the 12th and 13th centuries.[3] However, the Church was raided by the Vikings and fell into disrepair and is now maintained by the Environmental Heritage Service. Within the ruins, as an inset to the west wall is a sculpture of the crucifixion, which is thought to date from the 10th century – making it one of earliest surviving representations of the crucifixion in Ireland. St Lurach is also the saint of the town.[4]

The local leisure centre is Maghera Leisure Centre, on the Coleraine Road.