Southwick (ˈsʌðɪk) is a village or perhaps a small town in Sussex, sitting five miles west of Brighton. Southwich has been becoming a suburb of Hove, itself contiguous with Brighton.

The village is loosely divided into three sections: south of Brighton Road is the harbour with its associated industries and businesses; north of Brighton Road up to Old Shoreham Road is mainly residential properties dating from the middle of the nineteenth century to the 1950s; and the area between Old Shoreham Road and the South Downs being the most recent to be developed, also largely residential.

Southwick is served by Southwick railway station on the coastal line.

The Southwick Ship Canal branches of the River Adur here to head for Shoreham-by-Sea.

Southwick was recorded in the Domesday Book of 1086, in which it is recorded that:

Nigel holds Esmerwick of William. Azor held it of King Edward. Then, and now, it vouched for one hide and a half. There is land for 4 ploughs. In demesne are 2 ploughs, and 4 villeins and 6 bordars with 2 ploughs. In the time of King Edward it was worth 40 shillings, and afterwards 30 shillings. Now 4 pounds.

In that excerpt, the village is referred to by its earlier name, here rendered Esmerewick, which is the Old English Eastmerewic, meaning East pool hamlet. The village was first recorded as Suthewicke in 1309.

The village grew as the coast became a popular holiday destination, many of the properties being tourist accommodation. The railway arrived in the town on 12 May 1840, and was the original terminus of the line.

Beneath Manor Hall Road lies a first century AD Roman villa. It was an elabotrately-decorated lavish residence similar in design to Fishbourne Roman Palace. The site was acquired by the Sussex Archaeological Trust in 1931 and part of the villa was opened to the viewing public during summer months. In 1953-4 the site was sold to a property developer and in 1965 the Methodist church on Manor Hall Road was built. The site now lies below housing[1] and there are corresponding road names in the area, such as Roman Road, and Roman Crescent.

The Manor Cottage and what used to be the doctor's surgery are of historic interest. One of the town's schools, Eastbrook; was formerly known as Manor Hall Middle School; suggesting that there may have been a larger manor linked with the cottage.

King's Cottages on Southwick Green is reputed to be where King Charles II stayed overnight before escaping to France from the fishing village of Brighthelmstone (now Brighton).

The town's open-air shopping centre, Southwick Square, is home to many traditional and local businesses as well as some larger chains, and is central to the village since its expansion north of the Old Shoreham Road in the middle of the twentieth century. Before that the main shops were located on Albion Street, the main coast road. Adjacent to 'the Square', as it is known locally, is the Southwick Community Centre, and Southwick Library, which was rebuilt for 2007.

Famous tourist attractions include Orchard Close during the Christmas season in which every house in the street is decorated in lavish Christmas lights, with all money raised from the collection box going to various charities. 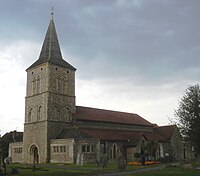 There are several churches in Southwick:

There is a leisure centre and recreation ground in Old Barn Way, which is home to Southwick Football Club. Southwick Rangers Youth Football Club, Adur Athletic Football Club and Southwick Hockey Club are also based in the town.

Southwick Hockey Club has a local clubhouse, although the home pitch is in Portslade. [2]

The Green, once common land central to the old village, consists of two separate fields divided by a short road of the same name. The smaller southern field, also home to the town's war memorial located in the south-eastern corner, is often used for local cricket matches. The larger northern field contains a small children's playground and is most often used for general recreation and is also the location where travelling fairgrounds and local fairs will set up during the summer and autumn months. There is also some parkland off Cross Road, just south of the Old Shoreham Road. North of the Old Shoreham Road, there is Quayside, once home to the Quayside Youth Centre which burned down in May 2005 and since re-built, and more open land off Downsway.

Unusually for a town of its size, Southwick has a theatrical scene thanks to the Barn Theatre, an 18th-century barn building converted into a theatre in 1951 and thoroughly revamped in 1998.[3]

There are several pubs in Southwick: