The Sound of Bute is an arm of the Firth of Clyde, forming the broad channel between the two main islands of Buteshire: the isles of Arran and Bute.

The coasts of the Sound are the Isle of Arran to the south and the Isle of Bute to the east. Its otrher coasts are peninsulas of Argyll: Kintyre bounds it to the south-west, and to the north is the Cowal peninsula.

Entering the sound at the north-west is Loch Fyne and at the south-west Kilbrannan Sound, which separates Kintyre from the Isle of Arran. In the north, the Kyles of Bute separate Bute from Cowal. 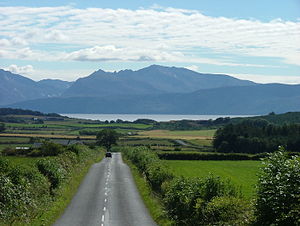 The Sound from the Isle of Bute