Soay is an uninhabited island in the St Kilda archipelago. The island is part of the St Kilda World Heritage Site and home to a primitive breed of sheep which bear its name. It is the westernmost point of land in the United Kingdom apart from the far-flung isle of Rockall.

Soay lies some 40 miles west-northwest of North Uist in the North Atlantic It is about a mile and a half north-west of Hirta, from which it is separated by the narrow Sound of Soay. Two sea stacks, Stac Shoaigh (Soay Stac 200 feet) and Stac Biorach (240 feet) lie between.

Soay covers about 240 acres and reaches a height of 1,240 feet, the cliffs rising sheer from the sea.

The island is formed of a breccia of gabbro and dolerites. It is formed as a single mountain peak rising from the sea-bed, without Ice-Age erosion. 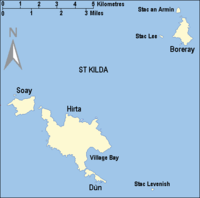 With the rest of the archipelago, Soay is owned by the National Trust for Scotland, managed by Scottish Natural Heritage as a nature reserve and is included it the St Kilda World Heritage Site.[1]

It is unlikely that this island ever had permanent habitation, but men from Hirta would stay for a few days while gathering wool.[2] Some stone dwellings remain on the island.

Feral Soay sheep are a relict population of the first sheep brought to northern Europe around 5000 BC. They were kept for their wool, which was plucked, not shorn, and made into tweed.[3] Only occasionally were the sheep killed for meat.[4] When the neighbouring island of Hirta became uninhabited, Soay sheep were introduced there too, and more recently they have become widely kept elsewhere as a livestock animal. Another somewhat less primitive breed lives on another island in the group, the Boreray.

On 28 August 2007 Andy Strangeway landed on Soay, St Kilda.[5] It was the first of the four extreme points of Scotland he landed on:

He is the first and so far only person to achieve this feat.