Two cairns exist on top of the mountain on either side of the tarn of which the northern cairn is a circular mound of stones approximately 40 feet in diameter whilst the southern one, known as Calliagh Birra’s House, is a large, well preserved passage grave which is the highest yet discovered in Ireland.[3]

Traces of fields on the mountain's poor soil from farming in earlier times can still be seen as well as evidence of quarrying. Today Slieve Gullion is barely farmed but is popular with visitors and trekkers with scenic road access up to about half of the mountain's elevation and remains of an old trail allowing easy access to the summit. Drumintee, Mullaghbawn, Lislea, Forkhill and Meigh lie in Slieve Gullion's immediate hinterland. 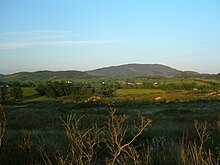 Slieve Gullion also features in the Fenian Cycle, where a tale is told of Finn McCool being tricked by the Cailleach Beara into jumping into the mountain's lake, from which he emerges an old and withered man. The Fianna force the Cailleach Beara to restore the erstwhile hero back to his former self but Finn never regains the true colour of his hair; it remains as white as an old man's for the rest of his life.