Skellig Michael or Great Skellig is an island in the Atlantic Ocean, 7 miles west of the Iveragh Peninsula in County Kerry.[1] It is the larger of the two Skellig Islands.

An early Christian monastery was founded on the island at some point between the 6th and 8th century, and was continuously occupied until its abandonment in the late 12th century. The remains of this monastery, along with most of the island itself, were inscribed on the UNESCO World Heritage Site list in 1996.[1]

The island rises steeply out of the ocean, isolated in a wild sea. Before the Victorian lighthouse the only steps were rough-hewn and narrow, yet monks came here, and those who supplied the monastery, and scaled the rock almost to the very summit, where a little ground was leveled for the drystone huts to be built. There are two peaks, joined by a saddle, the monastery on the south peak, but even on the precipitous north peak the remains of a monk's cell have been found.

Skellig Michael was uninhabited prior to the foundation of its monastery.[1] Folklore holds that Ir, son of Míl Espáine (Milesius), was buried on the island, and a text from the 8th or 9th century states that Duagh, King of West Munster, fled to "Scellecc" after a feud with the Kings of Cashel, although it is not known whether these events actually took place.[2] 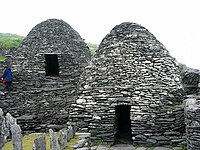 Beehive huts of the monks

The monastery's exact date of foundation is not known.[2] The first definite reference to monastic activity on the island is a record of the death of "Suibhini of Skelig" dating from the 8th century, however St Fionán is claimed to have founded the monastery in the 6th century.

The monastic site on the island is located on a terraced shelf 600 feet above sea-level, and developed between the sixth and eighth c. It contains six beehive cells, two oratories as well as a number of stone crosses and slabs. It also contains a later mediæval church. The cells and oratories are all of dry-built corbel construction. A carefully designed system for collecting and purifying water in cisterns was developed. It has been estimated that no more than twelve monks and an abbot lived here at any one time.[3] A hermitage is located on the south peak.

The diet of monks living on the North Atlantic islands was somewhat different from that of those who lived on the mainland. With less arable land available to grow grain, maintaining vegetable gardens became an important part of monastic life. Of necessity, fish and the meat and eggs of birds nesting on the islands became staples.[4]

The "Annals of Inisfallen" record a Viking attack in 823. The site had been dedicated to St Michael by at least 1044 (when the death of "Aedh of Scelic-Mhichí" is recorded),[2] however this dedication may have occurred as early as 950, around which time a new church was added to the monastery (typically done to celebrate a consecration) which was called Saint Michael's Church.[1]

The monastery remained continuously occupied until the 12th or 13th century.[1] During this time, the climate around Skellig Michael became colder and more prone to storms, and this, along with changes to the structure of the Irish Church, prompted the community to abandon the island and move to the abbey in Ballinskelligs.[2]

Skellig Michael remained in the possession of the Order of St Augustine until the dissolution of the Ballinskelligs Abbey by Elizabeth I in 1578.[1][5] Ownership was then passed to the Butler family with whom it stayed until the early 1820s, when the Corporation for Preserving and Improving the Port of Dublin (the predecessor to the Commissioners of Irish Lights) purchased the island from John Butler of Waterville in a compulsory purchase order.[2][5] The Corporation constructed two lighthouses on the Atlantic side of the island, as well as associated living quarters, all of which was completed by 1826. The Office of Public Works took the remains of the monastery into guardianship in 1880, and repaired certain collapsed structures, before purchasing the island (with the exception of the lighthouses and associated structures) from the Commissioners of Irish Lights.[1][2] 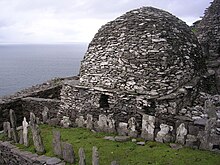 Skellig Michael was inscribed on the World Heritage List in 1996 An evaluation of the site by the International Council on Monuments and Sites (an advisory body of the World Heritage Committee), recommended that the island be inscribed on the basis of criteria (iii) and (iv) of the World Heritage List's selection criteria, which relate the cultural significance of a site.[5] The Committee approved this recommendation, describing Skellig Michael as of "exceptional universal value", and a "unique example of an early religious settlement", while also noting the site's preservation as a result of its "remarkable environment", and its ability to illustrate "as no other site can, the extremes of a Christian monasticism characterizing much of North Africa, the Near East and Europe".

Each year 13 boat licenses are granted to tour operators who each run trips to Skellig Michael during the summer season (April to October, inclusive), weather permitting. For safety reasons, because the steps up to the monastery are rocky, steep, and old, climbs are not permitted during very wet or windy weather. There are also dive sites immediately around the rock.[6]