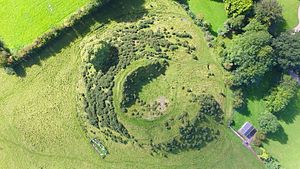 Dowth (Irish: Dubhadh) is a Neolithic passage tomb in the Boyne Valley of Meath that dates from about 2,500 – 2000 BC. [1] It is one of the principal tombs of the Brú na Bóinne World Heritage Site, a landscape of prehistoric monuments, and of this collection only Newgrange is older.

The tomb was partly excavated in 1847, an excavation which discovered that the tomb had been pillaged by Vikings and earlier looters long before that.

The cairn or tumulus of Dowth is about 280 feet in diameter and 49 feet high,[1] and surrounded by large kerbstones, some of which are decorated. Quartz was found fallen outside the kerbing, suggesting that the entrance to this tomb was surrounding by glittering white, as at Newgrange. Three stone-lined passages lead into the mound from the west.

The long passage is crossed by three sill-stones and ends in a cruciform chamber with a lintelled (not corbelled as in Newgrange or Knowth) roof. Several of the orthostats (upright stones) of the passage and chamber are decorated with spirals, chevrons, lozenges and rayed circles. On the floor stands a single stone basin — somewhat the worse for wear after 5,000 years. The right-hand arm of the cross leads into another long rectangular chamber with an L-shaped extension entered over a low sill. This may be the earliest part of the tomb, later brought within the design of the cruciform tomb. It is floored with a flagstone 8 feet long containing an oval bullaun (artificial depression). Until recently the cruciform tomb was reached by climbing down a ladder in an iron cage, and crawling about over loose stones. Now, access is restricted, and all the features are guarded by metal grilles.

A kerbstone with cup-marks, a spiral and a flower-like design marks the entrance to the second, smaller tomb — with modern concrete roof. This tomb has a few decorated stones, and a single, massive right-hand recess.

At the entrance to the passage of the cruciform tomb is an early Christian souterrain.[1]

Sketches of stone carvings from Dowth

Like neighbouring Newgrange, Dowth has a special solar alignment during the winter solstice. Martin Brennan discovered the remarkable alignment during the course of his ten-year study in the Boyne Valley.[2] From November to February the rays of the evening sun reach into the passage and then the chamber of Dowth South. During the winter solstice the light of the low sun moves along the left side of the passage, then into the circular chamber, where three stones are lit up by the sun. 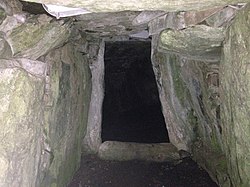 The convex central stone reflects the sunlight in to a dark recess, lighting up the decorated stones there. The rays then recede slowly along the right side of the passage and after about two hours the sun withdraws from Dowth South.