Shrewton is a village and parish on Salisbury Plain in Wiltshire, located around six miles west of Amesbury and 14 miles north of Salisbury. It lies on the A360 road between Stonehenge and Tilshead in the hundred of Branch and Dole. It is close to the source of the River Till, which flows south to Stapleford.

The name is derived from the Old English scīr-rēfa tūn, meaning 'sheriff's farm or settlement'.[2]

In 1934 the civil parish of Shrewton was enlarged by the addition of those of Maddington (to the south and west) and Rollestone (south and east).[3] 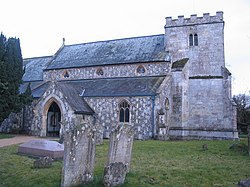 St Mary's Church, Maddington|St Mary's Church in Maddington was built in the late 12th century. It has been designated as a Grade-II* listed building[5] and is now in the care of the Churches Conservation Trust.[6] The church has Norman origins, belonging to Amesbury Priory in 1179,[7] with the earliest parts of the existing building dating from the late 12th and early 13th century,[5] however there have been several alterations since, including the renewal of the roof of the nave in 1603.[7] Sir Stephen Fox became the lord of the manor in the late 17th century and paid for the rebuilding the chancel and redecoration.[7] In 1853 the chancel was rebuilt and the whole church restored by Thomas Henry Wyatt,[6] including the erection of the gabled porch.[5] The walls of the nave and chancel have a chequerboard pattern of flint and sandstone. There is a low west tower. The interior includes a large plaster cartouche of strapwork enclosing the date 1637, which may the date of construction of a gallery which has since been demolished.[6] The stained glass includes work by Alexander Gibbs in the south aisle.[5] The church was declared redundant in 1975 and passed to the Redundant Churches Fund in 1979 which later became the Churches Conservation Trust.[7] The parish now uses the other St Mary's church,[8] in Shrewton, as distinct from St Mary's, Maddington.[7]

St Andrew's Church in Rollestone was built in the early 13th century. It has been designated as a Grade-II* listed building[9] and is now in the care of the Churches Conservation Trust.[10] The church is built of flint and stone in a chequerwork pattern. It has two large Perpendicular windows, and a font from the 13th century. The oak benches were brought from the redundant church of St Catherine’s at Haydon, Dorset in 1981.[10] 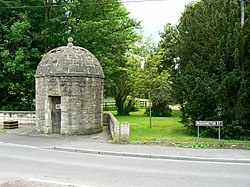 The village lock-up in Shrewton

The village has a primary school, Shrewton CE VC Primary School.[11] Appleford School, an independent specialist dyslexia school, is near the village.

Shrewton has a Non-League football club, Shrewton United F.C., who play at the Recreation Ground. The village also has a cricket club who play in the Hampshire League.[12]