Shirley is a small suburban town of Warwickshire. It is a residential and shopping neighbourhood, and a suburb of Solihull.

The Stratford-upon-Avon Canal skirts the western edge of Shirley, and it is possible to walk along the canal to Kings Norton 4 miles away, or Stratford upon Avon, further in the other direction.

Currently, the 'New Heart for Shirley' plan to develop 1.43 acres (4%) of Shirley Park,[1] to build a new shopping complex, with twenty new shops, residential apartments, cafes, restaurants and new public areas. This plan came under much local criticism, but has now been given the go ahead by the local authority. 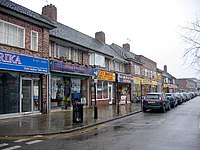 Shops on the Stratford Road, Shirley

To the south of the high street (Stratford Road, A34) there are two retail parks. Along the A34 there are many car dealerships. There are also plans to develop a large industrial estate on the Blackford Road side of Dog Kennel Lane, occupying the TRW site.

The earliest known settlement in the area was at Berry Mound in Solihull Lodge, part of West Shirley, which was the site of an Iron Age Hill Fort, a fortified village protected by earth banks, dating back to the first century BC and which covered approximately 11 acres.[2] The earth works can still be seen from the North Worcestershire Path which commences in Aqueduct Road, Majors Green.

Shirley was part of the Manor of Ulverlei (now Olton) until the establishment of Solihull in the 12th or 13th centuries[3] after which it became part of the parish of Solihull. Shirley developed slowly as a small village on the Stratford Road, called Shirley Street through the settlement. Between 1725 and 1872 Stratford Road was a turnpike road, and the ease of travel along this from Birmingham, and Shirley's remoteness attracted sporting activity in the form of bull baiting, cock fighting (reputedly at the Plume of Feathers pub) and pugilism. These activities and the poor morals brought to the village, and the expanding population, encouraged the church authorities to start building St James Church from 1832. Shirley became a parish in its own right in 1843. Shirley School which was in School Road until 1970s was built in 1833.

Shirley grew rapidly in the late 19th century and early 20th century, as people moved out of Birmingham, helped by the opening of the railway in 1908 as a Great Western route from Snow Hill station to Stratford upon Avon and on to Cheltenham. For a hundred years from the mid-nineteenth century, Shirley had a racecourse, and this was supplemented by a public lido in Sansome Road, the Odeon Cinema on Stratford Road, and the public library in Church Road, all in the 1930s.

Shirley also had its own council and council house, long since redundant as the town was swallowed within Solihull's influence and demolished. 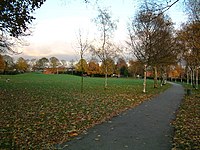 Shirley has a public library and park, and a small patch of woodland at Bill's Wood. There is also the canal as an invaluable wallking route into the Warwickshire countryside. Sadly Shirley lost its race course, public lido, and Odeon Cinema.

There are several pubs in the area, the most prominent being the Saracens Head, in the centre of Shirley. Others close by include the Colebrook, the Red Lion and the Woodmans Rest.

Solihull is roughly a 15-minute bus ride away.