Shellingford, historically also spelt Shillingford is a village in northern Berkshire, found a mile to the west of Stanford in the Vale, to which it is linked by a quite footpath, and some 2½ miles southeast of Faringdon.

In the 10th century the name of the village is found written Scaringaford and in the Domesday Book of 1086 its entry calls it Serengeford.[1] 13th century forms of the name included Salingeford, Schalingeford, Shallingford, Sallingford and Schillingford.[1] In the 18th century it was recorded as Shillingworth.[1] The spelling "Shillingford" is now very rare, which avoids confusion with the village of Shillingford, fifteen miles away in Oxfordshire.

Abingdon Abbey held the manor of Shellingford from 931 until the dissolution of the monasteries in 1538.[1] In 1598, the courtier Sir Henry Neville bought the manor.[1] It was later held by the Packer family.[1] In 1738 Sarah Churchill, Duchess of Marlborough bought it as an investment.[1] It was later held by the Goodlake and Ashbrook families.[1]

In the 19th century the Goodlakes built a new house to the north of the village, Kitemore House, to replace the Elizabethan manor house south of the church, which was then demolished.[1]

Between 1931 and 1957 there was an aerodrome, RAF Shellingford, between Shellingford and Stanford in the Vale. A quarry now occupies part of the site. 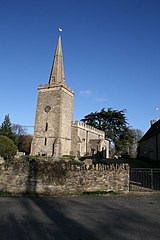 The parish church is dedicated to Saint Faith. It has a late 12th century Norman nave and chancel.[1] The church has been much altered in succeeding centuries but retains its Norman chancel arch, south door, priest's door and part of the north door.[2] The west tower is an Early English Gothic[2] addition from the early part of the 13th century.[1] In the 14th century[1] the chancel was rebuilt with Decorated Gothic windows[2] and a Decorated wondow was inserted in the south wall of the nave. In about 1400 a chapel was added to the north side of the chancel, but it does not survive.[1] The tower arch was rebuilt in the 15th century.[1] Early in the 16th century[1] two four-light Perpendicular Gothic windows[2] were inserted in the south wall of the nave and another Perpendicular window was inserted in the north wall of the chancel.[2]

The tower seems to have had a ring of four bells by the early part of the 20th century.[1] The tenor bore the date 1586 but the founder was unidentified.[1] Edward Neale of Burford[4] cast the treble in 1653.[1] Another bell bore no date[1] but may have been cast in about 1599.[5] Henry Bagley III, who had foundries at Chacombe and Witney,[4] cast the final bell of the four in 1738.[1] There is also a Sanctus bell that was cast in 1663.[5] In the 20th century the ring was increased to six, but of the original bells only the Bagley and undated bells survive.[5] Mears & Stainbank of the Whitechapel Bell Foundry cast the current tenor in 1920.[5] In 1998 Whitechapel Bell Foundry cast the present treble and another bell.[5] There is also another bell from the Whitechapel foundry, cast by Thomas Mears II in 1841.[5]

St. Faith's is now part of the Uffington Benefice, along with the parishes of Baulking and Woolstone.