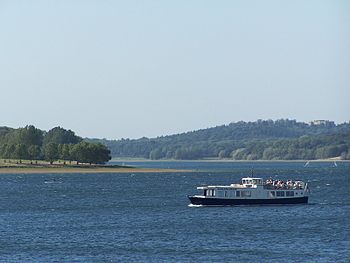 The Rutland Belle on the water 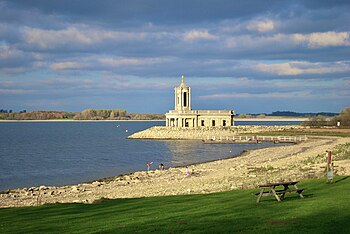 Rutland Water is a vast manmade lake in Rutland; a reservoir created to supply drinking water to the Midlands. In addition it is a popular visitor attraction for sailing and leisure activities around its shores.

The reservoir fills the meeting of two valleys, east of the county town, Oakham. It holds 27 billion gallons of water to supply some of the driest and most densely populated parts of the land. The centre of its dam is at grid reference SK942078. It is one of the largest artificial lakes in Europe, and by surface area it is the largest reservoir in England, but by capacity it is exceeded by Kielder Water.

During its construction and until its official opening in 1976, the reservoir was known as 'Empingham Reservoir', after the adjoining village of Empingham; perhaps a happier allusion that to use one of the several villages drowned under its waters.

Rutland Water is set in 3,100 acres of countryside. It has a 25-mile circular track for walking and visitors may hire a bicycle to tour it.[1] Since the water is drawn upon when needed, the relative areas of land and water vary a little but the flatter parts of the lake margin are enclosed by banks so that the wetland nature reserve is maintained (SK886073).

The construction of the reservoir required the damming the Gwash Valley near Empingham was completed in 1975. It flooded several square miles of the Gwash valley as well as the side valley at the head of which lies Oakham. Nether Hambleton and most of Middle Hambleton were demolished and their wells were plugged as part of the ground preparation. The neighbouring village, Upper Hambleton, survives, and now sits alone on a peninsula within the lake known as the Hambleton Peninsula.

The Gwash makes a net input to the lake but its flow downstream is maintained. Most of the stored water is extracted from the River Welland at TF017060, between Tinwell and Stamford and from the River Nene upstream from Peterborough, a city which is a major user of the water.

Because much of the valley is clay, material for the dam was extracted from pits dug within the area that would be subsequently flooded. The clay dam is 115 feet high, and around 1,300 yards long. At its base, it is up to 890 yards wide, and the finished structure has been landscaped to blend in with the environment, even when viewed from Empingham, the nearest village.[2]

Upper Hambleton and the remnant of Middle Hambleton, including the Old Hall, are now known simply as 'Hambleton' and are to be found on a long peninsula in the middle of the lake: land which was formerly a ridge between the two valleys in which the lake now lies. The few houses of Normanton avoided flooding although its church did not. The lower part of the building was supported against water damage so that its upper part could be used to present the story of the construction of the reservoir to the public. Some funerary monuments from it can be seen at Edenham church, Lincolnshire.

The reservoir is used not just for water storage, but is a popular sports centre - as well as water sports such as sailing[3] visitors enjoy fishing, walking and cycling along a 25-mile perimeter track. A pleasure cruiser, the Rutland Belle, carries people around the lake. Birdwatching brings visitors from far afield. The butterfly centre is now closed.

Swans on Rutland Water at dusk

Large areas of wetland (as well as several small woods) at the western end of the lake form a nature reserve, managed by Leicestershire and Rutland Wildlife Trust. The area is designated a Special Protection Area of international importance for its wintering populations of Gadwall (some 4% of this species' European population) and Shoveler.

The Anglian Water Bird Watching Centre is based here. Every August, the centre is the venue for the British Birdwatching Fair. Other birds found here include Lapwing, Coot, Goldeneye, Tufted Duck, Pochard, Teal, Wigeon, Cormorant, Great Crested Grebe, Little Grebe and, most notably, Osprey, which were re-introduced to the area during 1996.[4]

The lake is a Site of Special Scientific Interest.[5]

The lake itself is stocked with Brown Trout and Rainbow Trout, but there is a large head of coarse fish populated by water pumped in from the River Welland and River Nene, species include Roach, Bream, Pike, Zander, Perch, Eel and Carp.

The Lyndon Visitor Centre is located on the reserve's south shore. There are exhibits, bird viewing windows, trails and hides.