Rufford Abbey is a country house and estate in Rufford in Nottinghamshire, some 2 miles south of Ollerton, within the Dukeries in the north of the county.

Originally the site of a Cistercian abbey, it was converted to a country house in the 16th century after the Dissolution of the Monasteries.

Part of the house was demolished in the 20th century, but the remains, standing in 150 acres of park and woodland, are open to the public as Rufford Country Park. Part of the park is a Local Nature Reserve.[1][2]

The house itself is constructed of rubble, brick, dressed stone and ashlar with ashlar dressings and plain tile roofs.[3] It is Grade I listed and scheduled as an Ancient Monument.

A monastery, Rufford Abbey, was founded by Gilbert de Gant, Earl of Lincoln on 12 July 1147,[4] and populated with Cistercian monks from Rievaulx Abbey in Yorkshire.

Pope, Adrian IV gave the blessing for the abbey in 1156, following which the abbey's lands expanded and the villagers of Cratley, Grimston and Rufford, Inkersall were evicted. A new village of Wellow, just outside the estate housed some of the displaced people.[5]

The Abbey was dissolved in 1536 as part of the dissolution of lesser monasteries and the last Abbot, Thomas Doncaster, received a pension of £25 a year, but this was voided on his speedy appointment to the Rector of Rotherham on 2 July 1536.

After its dissolution, the abbey gained a reputation of being haunted by the spectre of a giant monk carrying a skull.[6]

Sketch of Rufford Abbey in 1773

After the dissolution, the estate was granted to George Talbot, 4th Earl of Shrewsbury. The buildings were partly demolished and converted to a country house between 1560 and 1590 by the 6th Earl.

The estate was inherited in 1626 by Mary Talbot, sister of the 7th and 8th Earls from whom it passed to her husband, Sir George Savile, 2nd Baronet. He remodelled the house in 1685–95. Sir William Savile, 3rd Baronet, George's successor, made Rufford Abbey the seat of the Savile family after he burnt down the Saviles' original home to prevent its being occupied by a Parliamentarian garrison during the Civil War, but was killed in action in 1644. It was next inhabited by his son, the Marquess of Halifax, the Lord Privy Seal, who died in 1695. In 1679, he constructed a new north wing on the site of the abbey church, containing reception rooms and a long gallery. He also built the large stable block to the right of the house. The surviving service wing (currently used as offices) was also added by the Saviles in the 17th century.

Sir George Savile, 8th Baronet died unmarried in 1784 and the estate passed to his nephew The Hon. Richard Lumley-Saunderson, later 6th Earl of Scarbrough. He was the younger son of the 4th Earl of Scarbrough and Barbara Savile, the 8th Baronet's sister and heiress. On his death the estate passed to his younger brother, the 7th Earl, and then to the latter's son the 8th Earl, who bequeathed the estate in turn to his second natural son Captain Henry Lumley-Savile. When Henry died in 1881 it passed to his younger brother Augustus William Lumley-Savile (1829–1887) and then to his eldest (but illegitimate) brother, the diplomat John Lumley-Savile, who assumed the surname of Savile only and was created Baron Savile the following year.

By the early 1900s, the Rufford Abbey Estate comprised some 18,500 acres, but had begun to feel the effects of rising running costs and reduced incomes. In 1931 the estate descended to the 3rd Baron Savile, who was only 12 years old, and the trustees took the decision to sell the estate off in lots. The abbey and park were bought by Nottinghamshire County Council in 1952.

The Lordship and Liberty of Rufford

The Manor of Rufford was listed in the Domesday Book.[7]

The Rufford Estate covered approximately twenty-nine square miles and in addition to the ancient Liberty of Rufford, it included the parishes of Bilsthorpe, Eakring and most of Ollerton, Ompton, Boughton, Wellow, and extended into Blidworth, Edwinstowe, Egmanton, Farnsfield, Kirton, Tuxford, and Walesby.[8]

The titles of Lord of the Manor of Rufford and of the Liberty of Rufford were sold at auction by the Manorial Society of Great Britain in July 2010.[9] 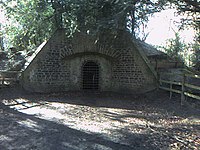 Although Rufford Abbey once boasted five ice houses, only two remain today. All were constructed around 1820, when the estate was owned by John Lumley-Savile, 8th Earl of Scarbrough (1788–1856). The five ice houses are located near Rufford lake, created c1750; for the simple reason that the movement of ice from its source was easier.

Not all of Rufford's ice houses faced north, as accessibility and the logistics of the ice may have meant that the builders found it easier to place the doorways facing the lake rather than northerly. It is believed that ice was mainly taken from Blackwalk Pond, which was drained to make way for housing in the 20th century. Blackwalk Pond was used to serve the abbey in Rufford's monastic era, and later supplied water to Rufford's water tower and brewhouse, which remain on site today.

The 1851 poaching incident and ballad

In 1851, a gang of forty or so poachers assembled in Rufford Park as a mass action against what was perceived to be the unfair monopolising of game-hunting rights by wealthy landowners. The poachers were attacked by ten gamekeepers and, in the ensuing battle, one of the gamekeepers was badly injured and later died of a fractured skull. Four of the poachers' ringleaders were arrested and each subsequently sentenced to deportation and fourteen years of penal servitude for manslaughter. The incident gave rise to the popular ballad, Rufford Park Poachers (Roud #1759), which depicts the poachers as bold heroes.[10][11]

"Rufford Abbey" is a popular piece composed and arranged for brass band by Drake Rimmer. It is often used as an intermediate grade competition piece, and is a popular choice for recitals.

The abbey was the setting for Helen Cresswell's children's book (1984) and later TV series called The Secret World of Polly Flint (1987). The small neighbouring village of Wellow was also used.