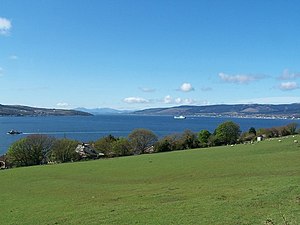 From Kilcreggan across to the Clyde

The Rosneath Peninsula is a long, lone pendulous arm of land in westernmost Dunbartonshire, between Loch Long in the west (which divides Dunbartonshire from Argyll) and Gare Loch on its eastern side, with the Firth of Clyde, into which both lochs open, to the south. It is approximately seven miles long, measured from the head of Gare Loch, and three and a half miles across at its widest point. The line of latitude 56° North cuts through the southern end of the peninsula.

The small village of Rosneath stands on the eastern shore of the peninsula and gives it its name. There are no towns here nor great villages: the largest villages are the contiguous villages of Kilcreggan and Cove at its southernmost tip.

During the Victorian era, the Rosneath Peninsula became a popular destination for wealthy Glasgow businessmen, who built luxurious holiday homes along its shore. Rosneath Castle was for a time the residence of Princess Louise, Queen Victoria's daughter. As with many grand houses in the area, it has since been demolished.

On the western shore of the peninsula stands Coulport, which village is home to a Royal Navy Armaments Depot, RNAD Coulport. On the eastern shore the hamlet of Rahane overlooks HMNB Clyde, the base of the United Kingdom's nuclear weapons.

Access to the peninsula is either by road (the B833 which runs from Garelochhead to Coulport) or by ferry from Gourock to Kilcreggan, though the ferry is for foot passengers only. During the summer months PS Waverley calls at Kilcreggan pier.

The B833 follows the shoreline but two roads cross the peninsula: both un-numbered, one for local traffic from Ardpeaton to Rahane, the other considerably larger and mainly designed for military traffic between Coulport and Faslane.

More recently the peninsula has become a popular destination for cyclists as it is possible to do a circular tour of the peninsula using the military road.[1][2]