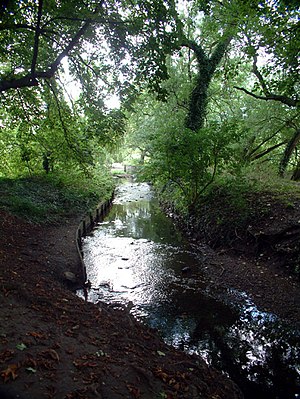 The Ravensbourne in Bromley

The Ravensbourne is 11 miles in length. It rises at Caesar's Well, Keston, four miles south of Bromley town centre, flowing initially in a northerly direction. For the initial third of its length the river flows across common land (including Hayes Common and Bromley Common) until it reaches the southern outskirts of Bromley town where it is joined by the Ravensbourne South Branch and the Ravensbourne East Branch, that substantially increase the flow. It then flows northwards alongside the A21, passing below Bromley town centre through Church Gardens and Glassmill Reservoir then on into Beckenham Place Park, the last semi-natural reach of the river, then further north through Ladywell Fields, where considerable renaturalisation work has been taking place since 2007/08.

South of Bellingham, the small river Spring Brook joins the Ravensbourne after flowing only about one mile from the east through Plaistow and Downham, and soon passes through a narrow park; Shaftesbury Park Recreation Ground and Downham Playing Fields follow it along its short course.

Just above Catford the Ravensbourne is joined by the River Pool. The Ravensbourne is also joined by the River Quaggy, known upstream of Sundridge Park as Kyd Brook and some 3½ miles in length. This rises near Princess Royal University Hospital at Locksbottom then flows north through Petts Wood to Sundridge Park in Bromley. It then flows northwards through the Mottingham area to Kidbrooke where it then turns westwards through Manor Park in Lee, before joining the Ravensbourne at Loampit Vale in Lewisham. Numerous other small streams and surface water outfalls join the main river between its source and confluence. Until the 19th century one such stream flowed from Brockley Cross crossing Tanners Hill before joining at Deptford Creek.

Its meeting with the Thames is in Greenwich Reach, north-east of Deptford town centre and west of Greenwich.

The Domesday Book recorded eleven corn mills on the Ravensbourne in the 11th century.[1] The 17th century London diarist John Evelyn bought one of these mills – Brookmills – in 1668 for "grinding colour".

The bridge over Deptford Creek was the site of the Battle of Deptford Bridge, 17 June 1497, the last battle of the Cornish Rebellion of 1497.

From the 16th century onwards until its closure in the 19th century, the proximity of Deptford Dockyard, a Royal Dockyard created by Henry VIII, gave employment to many small shipbuilders on the creek. Queen Elizabeth I knighted Francis Drake on board the Golden Hind in Deptford Creek on Drake's return from his circumnavigation of the globe in 1580. The Golden Hind remained moored in the creek until it broke up.

Deptford Creek was also host to a large power station, now dismantled,[2] as well as other heavy industries. Now regeneration of the area is under way. For much of the lower reach between Lewisham and the Thames, the Ravensbourne (and Deptford Creek) is joined by the Docklands Light Railway. Indeed, the channel was diverted in Brookmill Park so that the DLR could run along the route of the river. A new bend in the river was constructed that gave more natural banks and created a better habitat for flora and fauna. There are also a number of new developments, including the apartment blocks at the mouth of the creek alongside the Thames, just a short walk west from Greenwich town centre. The comedy club Up the Creek is located near the historic Deptford Railway Bridge and has hosted several noted comedians.