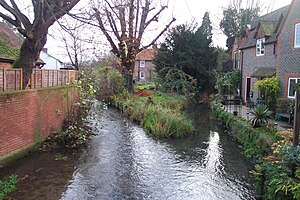 The River Pang in Pangbourne 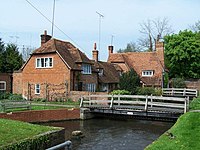 The Pang in Bradfield.

The Pang near Bradfield College

Swans on the Pang

The River Pang is a small chalk stream river in the west of Berkshire, which becomes a tributary of the River Thames. It runs for approximately 14 miles from its source near the village of Compton to its meeting with the Thames in the village of Pangbourne.

The Pang's name is a back-formation from the name of Pangbourne; "bourne" means "stream".

The river, and its water voles, are thought to have inspired author Kenneth Grahame's character Ratty and his book The Wind in the Willows.[1]

The river's source is normally near the village of Compton, although the exact location varies depending on rainfall levels. In times of high rainfall it is reckoned by some that it can be traced back to Farnborough, some four miles to the north-west, whilst at other times it may be as far downstream as Hampstead Norreys.

To the east of Bradfield the Pang is joined by the River Bourne and turns north to flow through the villages of Tidmarsh and Pangbourne, eventually entering the Thames between Whitchurch Lock and Whitchurch Bridge.

The valley of the River Pang between Compton and Bradfield is rather isolated, penetrated only by narrow country lanes. Because of this isolation, the valley has not become the residential commuter area that is much of Berkshire, and is still largely agricultural.

The Pang hosts a large quantity of wildlife, and plays its own part towards being a part of the community, especially within Pangbourne itself. The river has a good head of wild brown trout (Salmo trutta) up to 3/4 lb and is populated by grayling (Thymallus thymallus), indicating the general good condition of the water.

A concern in this river is the population of American Signal crayfish, which have displaced the native White Clawed Crayfish species.

The Berks, Bucks and Oxon Wildlife Trust owns a nature reserve straddling the Pang at Moor Copse, close to the village of Tidmarsh. A 72-acre extension to the nature reserve, in the area that is believed to have inspired Kenneth Grahame's work, was purchased in December 2006.[2]

In August 2007 a coalition of the Worldwide Fund for Nature, the National Trust and the Royal Society for the Protection of Birds called on the British government to adopt their blue print for Water. To publicise their campaign they highlighted the dangers to sites well known through literature such as The Lake District (Arthur Ransome's Swallows and Amazons and Beatrix Potter's Mrs Tiggy-Winkle), the North Kent Marshes (Charles Dickens's Great Expectations) and the River Pang.[1]