From Wikishire
(Redirected from River Luce)
Jump to: navigation, search 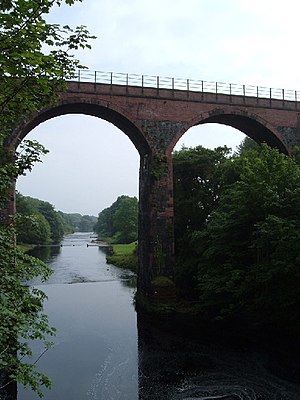 The Water of Luce is a river in Wigtownshire. A modest river, it is nevertheless the county's main river aside from the border river, the River Cree. It gives a name to two villages and the main bay on the county's south coast.

The Main Water of Luce rises in the edges of southern Ayrshire, in burns rising on the slopes of Beneraird, but the waters soon croses the county boundary into Wigtownshire where it continues the rest of its course. The higher reaches wander between the hills with such names as Steady Knowe and Stab Hill, the river swallowing many minor burns as it goes.

Theer are no villages on the course of the river until New Luce, where the Mian Water of Luce is joined by the Cross Water of Luce (which rises in the edge of Ayrshire not far east of the Main Water's sources). From New Luce, the Water of Luce flows south past the site of Glenluce Abbey to Glenluce Village, where it swallows the Lady Burn as at once takes here waters out to sea in Luce Bay on the Solway Firth.

The Luce is crossed by the eight-arch Glenluce Viaduct near to Glenluce. This once carried the Portpatrick Railway to Stranraer. The viaduct of the A75 crosses it just below the village.

The Luce crosses the tidal Sands of Luce at the north shore of the bay, joined at the ebb by the channel of the Piltsanton Burn.