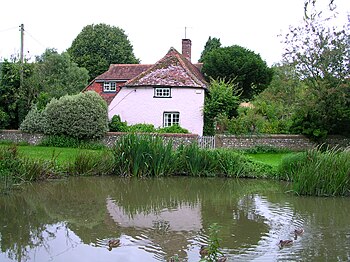 The source of the Lavant at East Dean pond

The River Lavant is a winterbourne in Sussex that rises at East Dean and flows west to Singleton, then south past West Dean and Lavant to Chichester. From east of Chichester its natural course was south to the sea at Pagham, but the Romans diverted it to flow around the southern walls of Chichester and then west into Chichester Harbour.

In January 1994 heavy rainfall caused the River Lavant to burst its banks, causing extensive flooding in Chichester and surrounding villages and forcing the closure of the A27 and A259 roads.[1] Military "Green Goddess" fire engines were stationed in the city for several weeks pumping out ground water through miles of pipes. When exceptionally high rainfall in the autumn of 2000 threatened renewed flooding of Chichester an emergency project was led by the Environment Agency, using emergency powers to build a relief channel to divert excess water back into the natural route of Pagham Rife. This brought forward work planned for 2001, compressing it into two weeks, and was completed days before the anticipated flood surge in the River Lavant occurred.[2] The emergency work was subsequently made into a permanent relief channel, with sluices at Westhampnett.

This Sussex article is a stub: help to improve Wikishire by building it up.
Retrieved from "https://wikishire.co.uk/w/index.php?title=River_Lavant&oldid=44890"
Categories: