East Dean is a village and parish in Sussex, located six miles north-east of Chichester on a narrow road between Singleton on the A286 and Upwaltham on the A285 road.

The village set in a valley in the South Downs has an Anglican parish church dedicated to All Saints, and a Nonconformist chapel. The village hall was formerly the school and bears the date 1782. There is one pub, The Star and Garter.

The church, the pub and most of the houses are built of flint, usually with brick quoins and window dressings. A fire in 1852 destroyed eight houses and several barns, leaving others damaged. Slate roofs replaced the thatch on some of these.

The pond is considered to be the source of the River Lavant. The Monarch's Way long-distance footpath crosses the parish on the downs to the south of the village.

Flint tools from the Stone age can often be found on the downs and there are a number of British Bronze Age round barrows in the parish. The outline of Celtic field systems can still be seen on Court Hill north of the village. Roman pottery and coins have been found near the village. 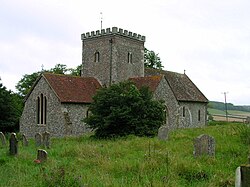 The playwright Christopher Fry lived in the village[2] in later life and died in Chichester on 30 June 2005.

East Dean have a football team, founded in 1880.