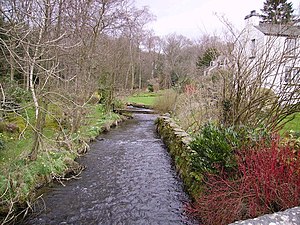 The Gilpin at Crosthwaite

The River Gilpin is a river in southern Westmorland, which is ultimately a tributary of the River Kent. It takes its name in honour of the local Gilpin family.

The river rises near Gilpin Lodge in the vicinity of Bowness-on-Windermere and flows in a general south-by-south-easterly direction through Gilpinpark Plantation.

At Crosthwaite, the direction of the river changes from south to south-east, continuing past the hamlet of Row into the Lyth Valley, where it is swelled by the much larger River Pool.

From there, the river continues moving south to Sampool, where it meets the River Kent.