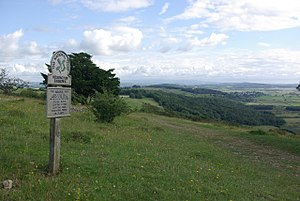 The Lyth Valley from Helsington Barrows

The Lyth Valley is a flat land, once largely marshland, which runs through the very south of Westmorland, on the edge of the Lake District National Park, between the low fells of southern Westmorland and of Furness. It reaches down to the head of the Kent Estuary. Through the valley flows the River Gilpin, joined here by the River Pool.

The valley is sheltered by limestone hills and enjoys a relatively mild micro-climate for the Middle Shires. It is noted for its damson orchards.[1]

The flat bottom of the valley was originally bog, but it has been drained for the benefit of farmers. In recent years there has been controversy about the cost of the pumps which keep the valley drained. For some years the pumping has been funded by the Environment Agency, but after reviewing its priorities in the region the Agency decided it did not wish to continue.[2]

The creation of an Internal drainage board has been discussed.[3][2] As of 2017, the pumps are still working pending a decision on how water level management is to be organised.[4]

There have been objections from environmentalists to a drainage regime which does not take account of the valley's contribution to biodiversity. It is argued that a less intensive drainage scheme would benefit wildlife.[5]