The River Avoca by Avoca village

The Avoca was originally called Abhainn Mhór ('Great River') or Abhainn Dé ('The god's river'). ('Avonmore' is now the name of its main headwater.) The present name is derived from the name of a river in Ptolemy's Geographia, which was thought to correspond to the Avoca; a river Ptolemy called Oboka (Οβοκα).[3] Other scholarship suggests that the Oboka is more likely refers to the Liffey.[4] 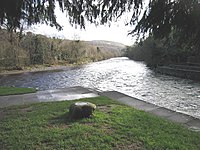 The village of Avoca stands on the riverbank. The Meeting of the Waters

The Avoca flows into the Irish Sea at Arklow where it widens into a large estuary, giving Arklow its Irish language name an t-Inbhear Mór ('the Great Inlet').

The long term average flow rate of the Avoca is 4,440 gallons a second. 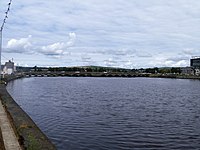 The Avoca in Arklow, with the Nineteen Arches Bridge

The valley of the Avoca has a large copper mine, and further downstream was the NET fertilizer factory (closed since 2002). These are said to have contributed greatly to pollution in the lower reaches of the river.

The railway line from Dublin to Rosslare also passes along the Vale of Avoca, cutting inland from its mainly coastal route and the R752 road tightly follows the west bank of the Avoca from The Meetings to Arklow.